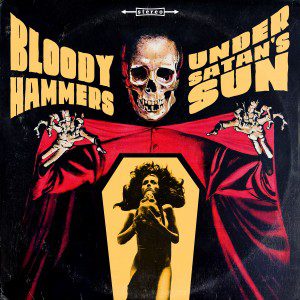 The discography of Bloody Hammers so far has made me think of them as underachievers. They have everything they need to be considered occult rock (song names, lyrical themes, album art covers) but the point is to be considered a successful occult rock band and that can only be achieved using one tool; music. In their past two albums, Bloody Hammers have delivered at least one hit song (listen to “At the well of Nazareth” from Spiritual Relics for example, great song) but then circle around a pattern of dull, wannabe occult/proto doom riffs which bear little resemblance to the genre and feel more like a softer version of it, with the safest possible choices of chords and repetitive song structures that clearly aim at commercial success.

So, I was hoping that after two letdowns, Bloody Hammers would try a different approach based on some groundbreaking ideas and interesting tunes. That expectation became quite stronger after the album opener, “The Town That Dreaded Sundown”, that is, hands down, the best song they have written so far. Nice atmosphere, even nicer melody and vocal lines and at last a non decorative role for the keyboards. “Spearfinger” was listenable and tilting towards satisfactory and “The Moon Eyed People” with its really heavy, classic doom riffs felt like it had run off a Pentagram unreleased demo. But honestly, that’s about it.

The rest of the album is just a sham and its positive start is what bothers me the most, because it’s apparent that they CAN produce something meaningful, but they just WON’T. The word “filler” is too weak to describe the rest of the songs, most fitting I find the term “Satanic AOR”. I thought maybe they could escape from their flat, drab sound if they thought out of the box, but they don’t seem keen on doing so. Fancy song names, a sample from a horror film or eerie sounds on the beginning of each track and general exploitation of the occult/doom scene aesthetic and when it comes to the part that matters the most, you get a mixture of doom rock with glam metal perspective. If you don’t like the main riff or the refrain that’s too bad for you since they are the only elements of the song! They tangle themselves into the effort of writing a catchy song so bad, that after a point it gets unbearable. The tracks included are so cheesy and devoid of the emotion that they supposedly represent that they could only impress a young child. Seriously, listen to “Welcome To The Horror Show” and then tell me how that could not be the product of a “Death SS meets AOR” logic. Now, that’s a horror show.

It’s another album with no special identity, no feeling whatsoever and no insight on the genre it has to be labeled under and it mostly makes me sad for the abilities Bloody Hammers show on the 3 good songs mentioned. They got the imagery right, they got the trend right, and they jumped head first onto the Uncle Acid train, but with a terribly wrong stance towards music (and quite possibly a wrong stance towards the reasons of playing that style of music nowadays…). This is the third album that has happened, but since they’ve all been released in a short period of time, I hope that they’ll take their time on their next effort and finally create something worthy of our attention.