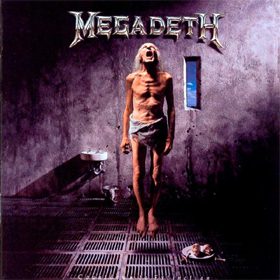 Many recirculation and anniversary celebrations were done by a lot of bands in recent years. On occassion of it’s 20 years anniversary, we will mention to a diamond album which appeared in the American charts in 1992; I refer to the album “Countdown to Extinction” which as we know is the only album of Megadeth which reached the second position in the American charts and made them even more famous.

Dave was in great mood. He had just got married and his son Justis had just been born. After the recognition of the band and having the same line up for the first time in Megadeths history, they hit the studio in January 6th, 1992. The production of the album made by Dave Mustaine and Maz Norman, even Dave himself have stated that Norman was in Dave’s mind and took those ideas to create a better album.  So the band entered the studio to start writing music and lyrics. Dave creates heavy easy mind-fucking riffs and some of his best lyrics from throughout his career. His goal was to overcome what Metallica did with “Black Album”.

When they finished the recordings in April 28 of 1992, Dave was sure that this record would make the world go mad. He knew that with these songs would reach one of the first charts’ positions. The band spent four months in the studio with Norman, writing and recording what would become Megadeth’s most commercially successful effort: “Countdown to Extinction”. The album was the first featuring writing contributions from each band member, and was named by drummer Nick Menza.

The album released in July 14 of 1992 and it hit the second position of Billboard’s 200 albums of the year.

“Countdown To Extinction” is the first time that Vic is not shown on the cover. On this album we can see a skeletal human who is ready to soar, he’s not touching the ground and he is ready from his countdown to extinction.

Skin Of My Teeth: The third single from Megadeth. The song, written by Dave Mustaine , deals with the theme of a failed suicide attempt, similar to the origin of the phrase “skin of my teeth”, where the commentator narrowly escapes from death. It’s one of the fastest songs of the album having as a highlight the ironic laughter which came from his guitar.

Symphony Of Destruction: The most famous song of the album. In the first five seconds of the song, the classical piece at the beginning of the song is the “Offertorium, Domine Jesu Christe” from Wolfgang Amadeus Mozart’s Requiem. The sound heard is an orchestra tuning their instruments, and then, it immediately shifts into a heavily melodic guitar riff which plays nearly continuously throughout the duration of the song.

Architecture of Aggression: It begins with gun-fires and a rocket launcher in the air, it continues with a heavy riff and some great solos from Marty Friedman. The lyrics are a verse of antiwar focuses on the military-industrial complex.

Foreclosure Of A Dream: It’s the fourth song of the album. It starts with a slow tempo and in the chorus strengthens with a great riff. The highlith of the song is again Marty’s and Dave’s solos. “Foreclosure Of A Dream” is a song that looks at rise and fall of political and economic ideologies, which also includes the infamous 1988 “Read My Lips” quote by George H. W. Bush (and on a more personal level, about Ellefson’s parents who allegedly lost their jobs under the Reagan Administration).

Sweeting Bullets: The term of the song means to be very nervous or anxious about something. Lyrically, Dave Mustaine stated “I wrote that about myself. It was pointed out to me that I’m kind of schizophrenic and that I live inside my head. Which is something I don’t subscribe to, but I enjoyed the theory nonetheless”.

Countdown to Extinction: A song about canned hunts (which many believed was a jab at Metallica’s frontman James Hetfield and his love for hunting) . The title song “Countdown To Extinction” also won the Humane Society of the United States “Genesis Award” for its dealings with issues of animal welfare.

High Speed Dirt: The intro riff seems like Van Halen’s songs but its not. It’s a Mustaine song, with a wonderful bluesy solo by Marty. Lyrically, it talks about their experience in skydinving.

Psychotron: It’s about a merciless cyborg killing machine of the same name and is based on the Marvel comic book character Deathlok.

Captive Honour: Its small in duration but miraculous. It’s a song about prison and the consequences of crime, great riffs and solo and a perfect lyrical interpretation by Dave.

Ashes in Your Mouth: Is the last song of the album, but for many fans the best of the album. It has a great heavy riff that makes you insane , it talks about the concentrates on the negative aftermaths of war (“Sweet taste of vindication, it turns to ashes in your mouth”).