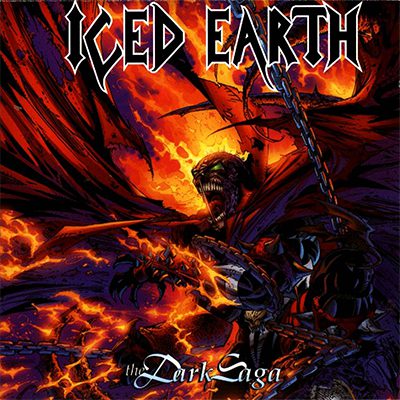 This is a tale about one of the most beloved metal bands of the Greek metal audience: Iced Earth. From the self-titled debut of 1990 and “Night Of The Stormrider” (1991) which were rightfully praised as some of the bands best so far to the blistering Matt Barlow debut “Burnt Offerings” (1995) taking the band off to new heights with its strong Death/Thrash influence and blackened atmosphere.

After that there was time for the first concept record of their career: Based around the comic book story of Spawn. Its name? “Dark Saga“. Starts off with the dark and headbanging title-track showing the trademark Iced Earth riffage and the narrating capabilities of Matt Barlow and shows the first chapter of the story, where Spawn sells his soul to Satan to have the girl he loves. On the next track “I Died For You“, one of the most heartbreaking love ballads ever written in metal music, he is found disappointed by what he sees: his beloved girl in love with his best friend “for love I sold my soul…”, Barlow feels every word he sings on this one. “Violate” is a track reminiscent of the “Burnt Offerings” violence, being a track with a strong Death/Thrash influence made to split heads wide open in moshpits, and lyricwise the side of Devil showing his sinister intentions after the big deal is done (“Enter now the fiendish one, twisted little man…”). “The Hunter” coming up next is an anthemic midtempo masterpiece and the writers’ personal favorite chorus (“Descending from heaven the angel sworn to bring him down, the hunter the thunder the wrath of heavens’ coming down”), taking us to the side of Heaven sending their own chosen warrior to strike down the new found disciple of Satan.

Τhe next one is called “The Last Laugh” shows the deception of Spawn by his once master in a bit faster riffage and a darkened chorus with Jon Schaffer helping create a sinister atmosphere through his backing whispers. Our story continues with one more headbanging midtempo track “Depths Of Hell” giving us a glimpse upon the pointlessness of the war raging between good and evil as well as how Spawns’ dreams are left shattered with no love in his soul, only revenge. And that is revealed on the fierce track “Vengeance Is Mine…The Suffering” showing a side of Spawn killing to cover up the emptiness in his soul, and the will of heavenly forces to strike him down. “Scarred” is a slower yet still dark and heavy track which shows Spawn in a state of thinking about his life and where this deal has brought him, bringing sadness upon everyone he’s ever known and ready to accept his fate as a “Slave To The Dark” where through an amazing slow intro and Heavy/Thrash riffage he wonders towards “And will the wrath of God have mercy on my soul? Or humiliate me desecrate me LIKE HIS ONLY SOOOOON?”. One of the best tracks of the record including an amazing chorus (“All at once is clear to me, damnation and destiny, a slave to darkness shall I be, damnation and destiny”) that could only be followed by what seems to be an ending to bring the writer to tears: “A Question Of Heaven” a legendary track, one of the tracks where Barlow has done the performance of a lifetime, showing the disappointed image of Spawn, giving up the fight with everything accepting his end (“I know you can’t forgive me I know I’m on my own I’ve betrayed you I walk alone…”) as well as a final part of him blaming Satan for his downfall (“What exactly is the meaning of this, just pawns in your twisted game?”) before the final apology of the character which should be written till the end:

My spirit begins to rise
into the heavenly skies
Just to be shunned away by you
Now all I want is to die, no streets of gold in the sky
And I wash my hands of you!”

Words would sound so poor trying to describe what one feels during those lyrics. Thus ends a metal masterpiece, one of the best concept albums ever written in the genre. The first album with which Iced Earth visited our country and became absolutely adored for, a love that climaxed to the live “Alive In Athens” in 1999 for the “Something Wicked This Way Comes” tour. Can’t wait to see them once more to sing along with anthems off this record and every single other great song they’ll choose to play for us.