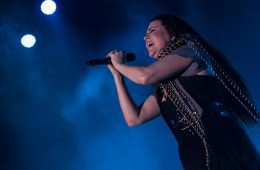 Paris DimitropoulosJuly 6, 2017
Going on a music festival is always a rush for me. Seeing the bands I like meeting people...
19 min read 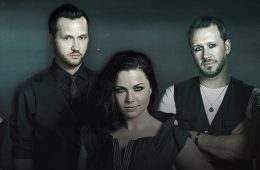 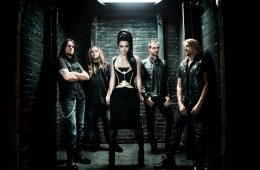 AMY LEE: There Are ‘No Plans’ For EVANESCENCE To Work On New Music

Manos SpanosNovember 1, 2015
EVANESCENCE singer Amy Lee has told RollingStone.com in a new interview that there are ...
01 min read 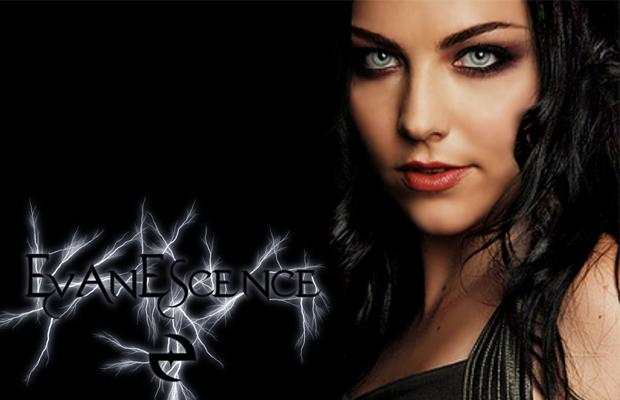 Manos SpanosAugust 27, 2014
The song "Push The Button" from EVANESCENCE singer Amy Lee can be streamed below. The track is taken from her new album, "Amy Lee Featuring Dave Eggar: Aftermath", which was released on August 25 via 110 Records, Inc. The disc is a film-score collaboration with Dave Eggar for the movie "War Story", which premiered in January at the Sundance Film Festival in Park City, Utah. Lee told MTV earlier the year that the music for "Aftermath" is unlike anything she's done before. She explained, "It's going to surprise my fans. It's not what you'd expect; the film is very dark, very introspective . . . There are moments of playing, and it's musical, but there are a lot of moments where Dave and I just built walls of sounds, out of blaring cellos and trombones and synthesizers and harp, all on top of each other. Sort of creating new sounds. It's not, like, a soundtrack. it's an atmosphere." Lee did write one new song for the film, called "Push The Button", about which she said, "It's very different for me, it's electronic; I did it all myself." She added, "This whole process has been really different, and freeing. Doing my band, it's always been a big deal, a lot of pressure, a lot of hoops to jump through and things to live up to . . . (this) wasn't about production and singles and worldwide success, it's about the integrity of the art piece we're creating." Lee said that she would like to score more films, explaining, "Dave and I were already talking about taking a meeting for another film, and I definitely want to work with him again." "Amy Lee Featuring Dave Eggar: Aftermath" track listing: 01. Push The Button 02. White Out (featuring Dave Eggar) 03. Remember To Breathe (featuring Dave Eggar) 04. Dark Water (featuring Malika Zarra) 05. Between Worlds (featuring Dave Eggar) 06. Drifter (featuring Dave Eggar) 07. Can't Stop What's Coming (featuring Dave Eggar) 08. Voice In My Head (featuring Dave Eggar) 09. Lockdown (featuring Dave Eggar) 10. After (featuring Dave Eggar) Lee has confirmed in a new interview with Rolling Stone that she doesn't have any plans "to do anything with [EVANESCENCE]" for the foreseeable future. Asked about the group's current status, Lee explained, "The situation is we're not doing it now. I don't like to make predictions about the future, because I'm honestly open-minded, and I would never want to say I'm done with any of it, because it's a huge part of me. I've loved my time with Evanescence, I wouldn't want to just throw it away, but, for the foreseeable future, I don't have any plans to do anything with the band." Lee continued, "It's really important to me to take some time to show some different sides of myself . . . there does need to be other outlets for me to make music." Lee, who became a mother for the first time last month, said that she keeps in touch with the members of the band, but added that "the days of living on the road and an album cycle be this giant daunting thing of working in the studio for six months then going on the road for a year or two, they're behind me." The last EVANESCENCE album, a self-titled effort, came out in 2011.
03 min read 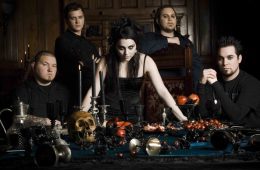 Manos SpanosJanuary 9, 2014
EVANESCENCE frontwoman Amy Lee tells MTV News that she has just recorded her first score with composer Dave Eggar for the indie film "War Story", which will premiere later this month at Sundance. "It's going to surprise my fans. It's not what you'd expect; the film is very dark, very introspective. There's not even a lot of dialogue, which is great, because to me it makes this beautiful, sad platform for music," Lee says. "There's a lot of blending of sounds, a lot of ominous tones. I play a lot of keyboard, and a lot of Taurus pedal. There's a lot of low drones. "There are moments of playing, and it's musical, but there are a lot of moments where Dave and I just built walls of sounds, out of blaring cellos and trombones and synthesizers and harp, all on top of each other," she continues. "Sort of creating new sounds. It's not, like, a soundtrack. it's an atmosphere." Lee also says that the experience of scoring a film is one she hopes to replicate again very soon. "I've been talking about wanting to score forever, and this was my first opportunity to explore that," she says. "Dave and I were already talking about taking a meeting for another film, and I definitely want to work with him again. I'm open-minded. I really like to be in a free place where I'm not boxing myself in; I say that all the time, but that's the goal right now." Lee is reportedly suing her longtime label, Wind-Up Records, for at least $1.5 million over unpaid royalties and other alleged misdeeds, according to TMZ.com. Lee has also alleged in her lawsuit that the company attempted to sabotage the band's career by assigning them to under-qualified promotion executives who lacked fresh ideas on how to market and promote the group. Asked by MTV News about the lawsuit, Lee said: "I can't say a word, I'm sorry. It's really for the best right now." TMZ.com did not cite its sources for the report, nor did it obtain any official statements from either the label or Lee, who is seeking over $1.5 million in back royalties. EVANESCENCE is actually no longer part of the Wind-Up roster. Back in November, Wind-Up sold most of its back catalog to the Bicycle Music Company and Concord Music Group, including the entire catalogs of EVANESCENCE, CREED, SEETHER and others. EVANESCENCE, whose third, self-titled album debuted at No. 1 on The Billboard 200 when it came out in 2011, has sold 25 million records worldwide. That last disc came out after a five-year hiatus and Lee told The Pulse Of Radio at the time that she wasn't even sure if she wanted to keep on making rock music. "For me, it had really been such a long time for us coming back after, you know, five years or four years of not doing it, living normal life and not even thinking about EVANESCENCE for a lot of that time, it starts to feel like, is this really still me?" she said. "You know, have I outgrown this thing? Is this going to work anymore? You know. Who am I? [laughs]" The band toured through mid-2012 in support of the CD, but has been inactive since then.
03 min read 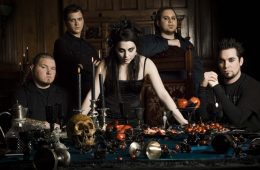 Manos SpanosJanuary 4, 2014
According to TMZ.com, EVANESCENCE singer Amy Lee has filed a lawsuit against her longtime record company Wind-Up, claiming the label attempted to sabotage the band by appointing under-qualified promoters who lacked useful ideas. Lee is reportedly seeking $1.5 million in unpaid royalties from the record label as part of her suit. March 4, 2013 marked the 10th anniversary of the release of "Fallen", the major label debut by EVANESCENCE that became a monster, multi-platinum hit for the Lee-fronted rock band. According to The Pulse Of Radio, Wind-Up Records reissued the album on limited-edition purple vinyl in May 2013. Led by the smash single "Bring Me To Life", which also appeared on the soundtrack to the movie "Daredevil", "Fallen" sold a whopping seven million copies in the U.S. and yielded three more singles with "Going Under", "My Immortal" and "Everybody's Fool". EVANESCENCE also won Grammys in 2004 for "Best New Artist" and "Best Hard Rock Performance". The success of "Fallen" also led to turmoil within the group, as founding guitarist Ben Moody left in late 2003, leaving Lee as the only original member of the band. Lee continued with new members, and EVANESCENCE issued "The Open Door" in 2006. While a hit, it did not equal the sales of "Fallen". Lee told The Pulse Of Radio at the time that she wasn't concerned about matching the previous album's success. "I just haven't ever looked at it that way," she said. "'Fallen' is a great record, but I don't think you can try to match the success of another body of work. I think that's only gonna frustrate you. And if, honestly if what you really care about is record sales and money, there's no way you're gonna make a great piece of art, because then you're just gonna get all confused and make something ingenuine." After another protracted absence, during which Lee flirted with a solo career and even began a more electronic album only to abandon it, EVANESCENCE released a self-titled effort in 2011 and toured behind it for the better part of a year.
02 min read

Manos SpanosMarch 6, 2013
According to The Pulse Of Radio, Monday (March 4) marked the 10-year anniversary of the release of "Fallen", the major label debut by EVANESCENCE that becam...
02 min read 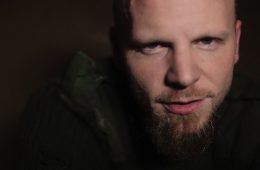 Manos SpanosJanuary 29, 2013
According to TMZ.com, former EVANESCENCE guitarist Ben Moody is being sued by Rider Management Inc. for $500,000 in unpaid commissions. Rider claims to have ...
01 min read