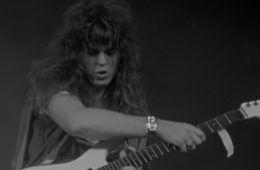 CRAIG GOLDY On VIVIAN CAMPBELL: ‘He Just Seems Determined To Hold On To A Grudge’ 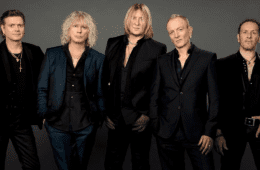 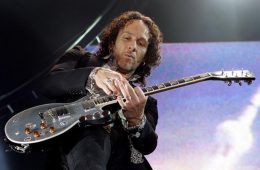 Manos SpanosJune 24, 2014
DEF LEPPARD guitarist Vivian Campbell will receive a stem-cell transplant in September after doctors discovered his cancer had returned. Campbell — who before joining DEF LEPPARD in 1992 was well known for his work with DIO and WHITESNAKE — went public with his Hodgkin's lymphoma diagnosis last summer, but announced in November that he was in remission. However, Campbell has now revealed is still battling the disease with a new high-tech chemo treatment. In a new interview with Utah's Daily Herald, he said: "The remission was a little bit premature. It came right back. I don't know if the cancer came back or it never totally went away, you know, but the initial scan I did last fall after doing my chemo, the scan came back clean. But there was something about it the oncologist was unclear about and didn't feel good about, so I was referred to another specialist. "I suppose one of the advantages about being in this city [Los Angeles] that I dislike so much is that there's a lot of great medical facilities here. There's a place called City Of Hope just outside of L.A., and there's a specific oncologist there who's probably the leading oncologist with regards to Hodgkin's in the U.S., and he sent me to him. He had a look at my scans and, you know, everyone was a little bit apprehensive, and he said, 'Well, for now you appear to be in remission." I kind of took that ball and I ran with it, and, unfortunately, it turned out to be premature. So the followup scan that I did a couple months later showed that there was definitely some growth coming back. I ended up having a couple of biopsies — I did a needle biopsy in January and that showed that I was fine, but my oncologist said, and he was right, that needle biopsies are notoriously uncertain, and he suggested I do a surgical biopsy. So I went to Dublin and started to record with the band, we started work on a new record, and as soon as I got back from that, I did another surgical biopsy and that showed that the cancer had definitely come back." He continued: "I'm actually doing this new high-tech chemo treatment, I'm about halfway through it already, and it's really kind of easy going. It's the first new drug that's been discovered for Hodgkin's since 1977 and they made this discovery in 2011, and it's actually being pioneered here at City Of Hope, so I'm part of this research clinical trial that's going on. It's very, very benign chemo, actually it just targets — I don't know how it works, obviously I'm not a medical person, but somehow or other it just manages to target the cancer cells. It's not like old-school, carpet-bomb chemo where it kills all the fast-growing cells, so I haven't experienced any hair loss or any issues with my skin or nails or anything this time around, which is good. And assuming that works, I'm going to have to continue a couple of treatments, actually, over the course of the tour, so that's awkward to work around, but not impossible. Assuming that it all works and I actually get to a perceived remission stage by August, then as soon as the tour is over in early September I'm going to get a stem-cell transplant, which I can't say I'm looking forward to, but I've been told if I don't do that, the cancer's going to just keep coming back every couple years. And every time it's a little bit more resistant. It is what it is. It could be worse — but at least I have health insurance. [laughs]" Campbell, who has just joined his DEF LEPPARD bandmates on tour as they kicked off a 42-date trek with KISS last night (Monday, June 23), in Salt Lake City, Utah, believes that being on stage might be the best therapy for him. "It absolutely is," he said. "And when I was going through the chemo last year and the band said to me, 'We've been offered these shows. Can you do them? Do you want to do them? Or we can get someone to cover for you?' I said, '(Bleep) that (bleep)! I'm not having someone else do my job. It actually was very, very therapeutic for me to go and get on stage and do that. And the same is true this year. There's nothing worse than sitting around the house concentrating on the negative. I've always enjoyed my work, and I've always felt very fortunate to be able to do what I love. I am well up for the summer tour indeed." Campbell's health setback is not expected to affect the recording sessions for DEF LEPPARD's' next album, the follow-up to 2008's "Songs From The Sparkle Lounge", which is being laid down in several sessions. Campbell told a Florida radio station in April: "Our third and final instalment will be in November, to finish up the record. We're hoping for a release for early spring, 2015."
05 min read

Manos SpanosNovember 6, 2013
51-year-old DEF LEPPARD and LAST IN LINE guitarist Vivian Campbell, who was diagnosed with Hodgkin's lymphoma earlier in the year, has posted the following message on his Facebook page: "For anyone who gives a toss, after doing another PET scan and all the other follow-up tests, then getting a second opinion, etc., I'm officially in remission from Hodgies. That's the good news. The bad news is: I no longer have an excuse to not go to the gym." Campbell, who joined LEPPARD in 1992 after stints in DIO and WHITESNAKE, had been receiving chemotherapy since April. "I feel fortunate that my cancer sent me an alarm call in the form of 'the cough that wouldn't quit,'" Campbell said earlier in the year. Hodgkin's lymphoma is a cancer of the immune system characterized by the painless enlargement of lymph nodes, spleen, or immune tissue. "I did kind of want to not go public with it at first, because it is a weird kind of thing,"Campbell said in a June radio interview. "You've got to kind of learn to deal with it on your own terms before you can address the rest of the world about it. So, you know, I feel very comfortable going public about it. For the first couple months, I even tried to keep it from my children, because they were still in school and doing exams and stuff and I didn't want to add to their concerns. But after a while, it's inevitable that you, you know, something's going on and you have to kind of come out with it and kind of explain what the situation is. But I'm very comfortable with it. I'm very comfortable with the treatment. I'm very comfortable with how my body is reacting to it." Last month, DEF LEPPARD's recent Las Vegas extravaganza hit the silver screen for two nights. NCM Fathom Events together with AEG Live and Network Live brought DEF LEPPARD "Viva! Hysteria" concert to over 250 theaters across the country with a full front-to-back performance of 1987's multi-platinum "Hysteria" album — along with a healthy dose of the band's greatest hits.
02 min read 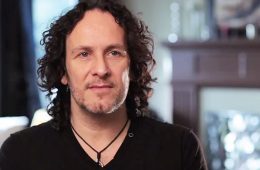 Manos SpanosJuly 24, 2013
Rock Guitar Daily recently conducted an interview with former DIO and current DEF LEPPARD/LAST IN LINE guitarist Vivian Campbell. A couple of excerpts from the chat follow below. On how it felt to revisit the early DIO material with LAST IN LINE during the band's first rehearsal: Vivian Campbell: "It was very, very, very exciting, and it actually sounded incredible! We probably could have done a bit of a gig that night. It was so tight, and it all came back so quickly for us. It was a very unique chemistry that happens with any group of players, especially when you write the songs together. I firmly believe that no two people play alike — no two guitar players are quite the same, no two drummers are the same. There's all sorts of difference between the notes, and little grace notes that are very unique to individuals. You know, Vinny [Appice, drums], Jimmy [Bain, bass] and I,
06 min read

Vivian Campbell: ‘I Regret A Lot Of The Things I Said About’ Ronnie James Dio

Vivian Campbell On Last in Line: ‘Gonna Be Big Fun When We Take This On The Road’