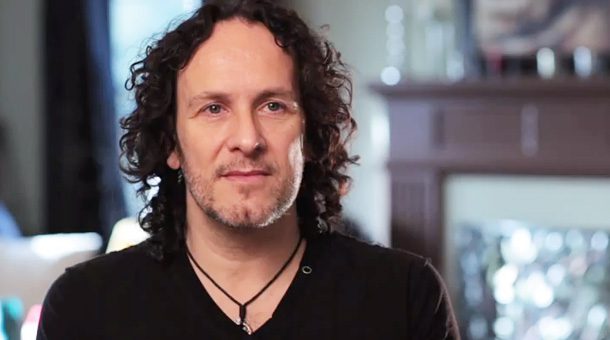 Rock Guitar Daily recently conducted an interview with former DIO and current DEF LEPPARD/LAST IN LINE guitarist Vivian Campbell. A couple of excerpts from the chat follow below.

On how it felt to revisit the early DIO material with LAST IN LINE during the band’s first rehearsal:

Vivian Campbell: “It was very, very, very exciting, and it actually sounded incredible! We probably could have done a bit of a gig that night. It was so tight, and it all came back so quickly for us. It was a very unique chemistry that happens with any group of players, especially when you write the songs together. I firmly believe that no two people play alike — no two guitar players are quite the same, no two drummers are the same. There’s all sorts of difference between the notes, and little grace notes that are very unique to individuals. You know, Vinny [Appice, drums], Jimmy [Bain, bass] and I, we wrote those songs together, so nobody is ever going to play them like us — and as soon as we started playing, it all came right back.”

On people who are critical of his decision to perform the DIO material again after so many unpleasantries were exchanged between him andRonnie James Dio over the years:

Vivian Campbell: “Why would anyone be against the LAST IN LINE idea? We wrote and recorded those songs, and we’d like to play them! That’s what it comes down to — the only issue being that Ronnie and I had a public spat. I can hold my hand up and admit being wrong about saying some mean things about Ronnie, and I was also derogatory about the genre of music. The thing that DIO fans may not completely understand is that they weren’t there when we wrote and recorded those records.Ronnie was a very difficult person to work with. He was a lovely human being to his fans, but he didn’t always share that wonderful personality with those closest to him. Every human being is complex; there’s no black-and-white, no cut-and-dried. I had a very difficult relationship withRonnie, and he had a very difficult relationship with me, and it really hurt me that he not only fired me, but he went on to portray it as if I had left the band. So that’s what got me so riled up, and I really turned my back on him and the genre of music because I was very, very hurt by what it was he had done to me. I admit that it was childish, but a lot of water has gone under the bridge, and for me, I’ve taken all that out of the equation. When I think about the music, I didn’t listen to it for almost thirty years — that’s how caught up I was about that shit. Ronnie and Wendy Dio went out of their way to portray me as someone who had turned my back on the band in the middle of a tour and quit, which was absolutely, 100 percent untrue — I was fired from that band, I never intended to leave that band, and I never wanted to leave the band. Those are my songs as much as they are Ronnie‘s songs. Jimmy, Vinny, Claude [Schnell, keyboards], and myself got fuck-all for those records. We got nothing from the record sales, none of the t-shirt money — we were salaried musicians earning less than our road crew! Because we believed in the music, and we believed as Ronnie had told us that we were going to have an equal cut by the third album. And that’s all I asked for! The third album came along and I said, ‘Ronnie, do you remember that first time we met in London when we jammed and this band was put together, and you had promised us that by the third album it would be an equity cut, which was why we got fuck-all for all those years?’ We put our blood, sweat, and tears into doing that and it hurt the fuck out of me, as it would anyone. So then he goes and fires me, and portrays me as being the one who quit. So for thirty years, I didn’t listen to those records. I wanted nothing to do with DIO, I wanted nothing to do with that genre of music — I just removed it all from my life. After thirty years, and maybe it is becauseRonnie‘s dead, maybe that does make it easier, I don’t know — I haven’t sat down and analyzed it, but the fact is, that’s my music, I’m the one who’s entitled to play it, and that’s what I’m going to do. What really makes me laugh is when people think I’m doing it for the money! We’ve got four shows booked in the U.K., and I can’t even begin to tell you how much money it’s costing to do that. It’s all for the love of guitar playing, the only reason I did it in the first place! The only thing that I would ask is that people come with an open mind.There’s been a lot of shit said in the press, a lot of it untrue, some of it is true, but it’s truly about the music. I’m not doing this for the money, believe me, I’ve got plenty of money. It’s about the love, the passion for the guitar playing. When I did it in the first place, I didn’t do it for the fucking money — $100 a week, I don’t think that’s a lot of money, and that’s what I got for doing ‘Holy Diver’. And that’s pretty much what I’ll get for doing it again, thirty years later. [laughs]… Right up until the ‘Sacred Heart’ tour, and when I got fired, we were still getting paid less than guys in the crew. It’s one thing to get less than the principal artist — yes, I get that — but to earn less than the crew? Especially when you are the ones writing the songs. It’s not like we were hired to play the parts. We wrote those fucking songs, we were part of the band, and we were totally gipped over. But in hindsight? I said all those things about Ronnie, and well yeah, part of it was true aboutRonnie being the one who ultimately made the decision, but it was really all Wendy Dio. Jimmy Bain, Vinny Appice, Claude Schnell, they still haven’t made a fucking dime, nor have I. I have been very fortunate to have twenty years of work, so I’m doing fine, thank you. Rock ‘n’ roll is full of these kinds of stories though, y’know? But it’s all just very much a labor of love.”