25 Years Later, They Are Still Hungry!

Few times in history there has been points that set such a basis of what came to be later. There are times where it seems everything you have done goes right, like everything cospires in order for you to get what you deserve, be it success, joy, recognition or whatever else positive. This is the story about the biggest moment in the life of a nominal band: Twisted Sister! And we are going to give some more information about the third album of the band, ”Stay Hungry”.

Completing this year 25 years after its release, it still remains one of the best moments in the history of music generally, as it exceeds the limits of hard rock and heavy metal. There had been two more albums and one EP before this of course, having already prepared the ground and having made the band worldwide known. In June 1982 the band produced its first release, an EP called ”Ruff Cuts” in the Secret Records Label, shortly followed three months later by one of the best debut albums ever, ”Under the Blade”. The next step was to sign to a major record company and it was Atlantic Records that obtained the signature of the band. So came in 1983 the second album entitled ”You Can’t Stop Rock ‘n’ Roll, which also was a big success and the band started a series of great video clips with the title track of the record.

It was not until May 18 of 1984, the date that marked the big change in the band’s history. It was then that their third effort, ”Stay Hungry” was released. And it really caught everyone by surprise. It was not only the variety of songs and the including of their finest moments so far. It was also the right timing, as hard rock and heavy metal had started gaining more success and promotion via press and television. Produced by Tom Werman, the album was a little more commercial to the ears than the previous two, but still sounded heavy and tight as in the past. The two finest songs of the band are included here, talking about ”We’re Not Gonna Take It” and ”I Wanna Rock”. Followed by two great videos, where the band also shows its funny and comedic side, they pushed the album’s sales forward to the maximum, as it sold two million copies by the summer of 1985, and three more in the future, becoming the band’s biggest success undoubtedly. 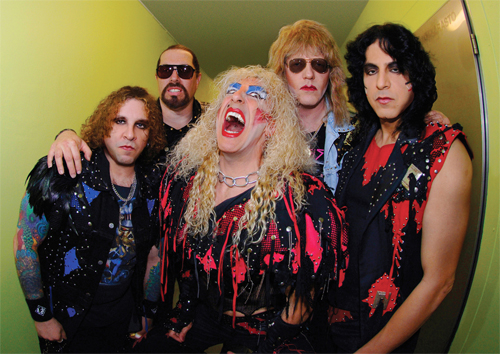 Also, there was a tour about the album, followed by then youngsters Metallica (which later became the best band the world has seen). One crucial point was also a cameo appearance of the group, performing ”Burn In Hell” for the movie ”Pee-Wee’s Big Adventure” for Warner Bros. This song was also covered many years later by the black metal band Dimmu Borgir in their album ”Puritanical Euphoric Misanthropia”. Nothing goes to the top without contradiction though, as the videos of the band, despite the funny approach, were considered violent against parents and teachers. PMRC hunted the band as they could (as did with other bands like W.A.S.P.) and vocalist Dee Snider had to testify before a Senate, one of the few musicians obliged to do that. Of course, it has remained in history what he answered when they asked him what SMF means.

He simply stated: Sick Mother Fuckers! Way to go Dee! As far as the album is concerned, words are poor to describe. Besides the three most recognizable tracks mentioned above, contained here are also the title track which opens the album, a classic live chiller, the Horror Terria suite combined by ”Captain Howdy” and ”Street Justice”, which later was mentioned in Dee Snider’s movie ”Strangeland” in 1999. The story of these songs was the basis of the film and Captain Howdy was played by Dee Snider himself. The ballad ”The Price” was, is and will forever be one of the most emotional songs in life, a landmark of hard rock and heavy metal. The album closes strongly with the last 3 songs, ”Don’t Let Me Down”, ”The Beast” and ”SMF”. To sum up, this was the battering ram that helped Twisted Sister get what they deserved. Sold out shows followed, recognition from all the fans around the world and for the next three years, the band continued being one of the strongest and most reliable live acts.

25 years later, they are still hungry. And God only knows what runs inside their veins. Twisted Sister, come out and plaaaaaaaay…