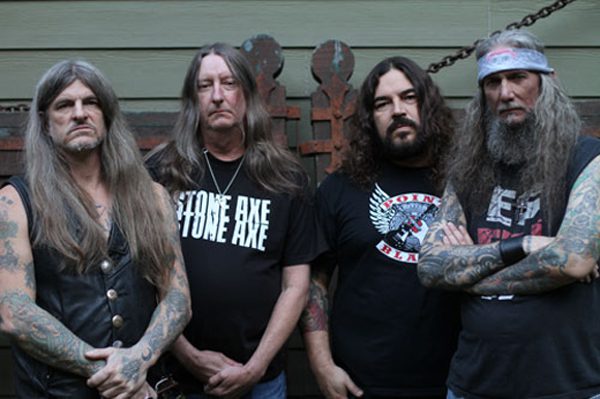 Sitting in a very comfortable press-room at Hellfest alongside with Mark Adams, Dave Chandler and Scott “Wino” Weinrich, we have almost entire the band in front of us and the chance to talk about the band’s latest release “Lillie: F-65” and other interesting things about the past, the present and the future of the band! … by Stella Papaspyropoulou

Good evening! We are here, on the second day of Hellfest in France and we have here with us at Metalpaths Saint Vitus.

Wino: How are you doing? 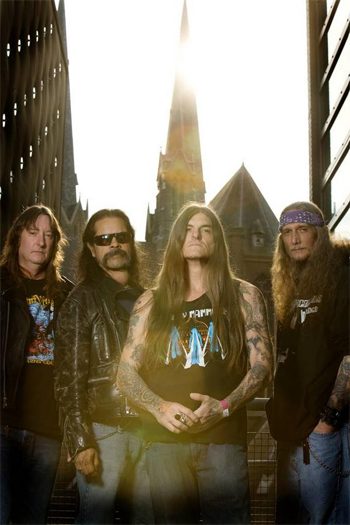 I’d like to ask you for the start, how does it feel to be back again recording after 17 years of hiatus, and especially with this line up?

Dave: Yeah it’s cool. It’s like everything fell back together like it should have. We are really happy with everything.

Wino: We had a great engineer; the chemistry between us is great. It’s all good.

I’ve read somewhere that “Die Healing” was supposed to be your last album. What made you continue with Saint Vitus?

Dave: The fans actually. We wrote “Blessed Night” on the road from sound check riffs and people started asking “is this off the new album?” and we were like “Why? Would you mind if it was? Would you be interested?” and everyone said “Yeah! We want a ne w record”. So “Lillie: F-65” is for the fans. We had no plans for a new album.

Well, as you said, it was a highly anticipated album, “Lillie: F-65”. Did you ever feel any pressure at all during the writing of the album?

Dave: Yeah, it was really hard because I was wondering if I could catch the old feeling that I had. Because when I wrote the old stuff like “Born Too Late” I was very angry. And every day that I’m not angry anymore, I thought if I can’t catch this it’s not gonna work. Once we started recording it, it wrote itself and everything just came back. It was difficult; I was really worried, until it came down to it. When the songs flowed out I was like “there it is!”

Wino: We always worry about a new release. It’s always the possibility that somebody might not like it. This is high pressure game.

I understand what you mean. A couple of years before the release of “Lillie: F-65”, you did a couple of live shows. Did that help you get back on track?

Dave: Yeah. That’s how we wrote “Blessed Night” and that was the reason, like I said, why we wrote “Lillie”, because we were in the flow playing every night and that made me wanna keep doing it for sure. It was too much fun to stop. 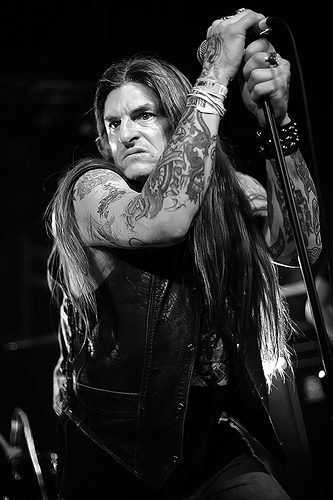 Wino: Unfortunately our original drummer passed away. After he passed away, I think there was the decision to carry on but we got Henry in the band. He brought a first new energy; he had a totally different style. He brought this wicked energy and a real desire, which of course is giving more to it.

Dave: He gave us, he gave myself and Mark, like I said new spark. He beats the shit out of the drums. “Oh good! We can turn up!”

Wino: He was a fan, so coming into it with all that is amazing. We really like him!

How long did it take you to finish with the writing and the recording of the new album ?

Dave: Probably from the concept to the end of the recording, 8 months? 9 months? Almost like a birth.

And if I’m not mistaken, everything is brand new. You didn’t have anything written before, some riffs or anything?

Dave: No, it’s all new. I mean I had a couple of riffs in my head but nothing was ever done anywhere. That’s all new.

Wino: We put together “Vertigo” in the studio, but I had the idea already. We knew it would be the type of song that we would play live. We built it to be what it is, with this intro. So, the ideas were there and shaped it once we got with Tony Reed. He’s an amazing engineer. He kicks some ass!

There is a big gap between “Die Healing” and “Lillie”. How has this gap affected the new album?

Dave: Just made it harder to write, that’s all. Once the new album is there, it’s like the gap disappeared. A lot of people say that it sounds like it was recorded right after the “V” album. Which is what I wanted.

Wino: There was medium change. We didn’t change our attitude or our ideals.

Dave: We’re dinosaurs stuck in the tar and we don’t wanna come out.

Since you are here, in 2012, and looking back at your previous releases, did you want to do something different?

Dave: I wanted it to sound modern enough for the new technology, especially the internet. I wanted it to sound good and not lose the balls low in. But also I didn’t want to disappoint the old fans, because I hate it when gets back together, writes a new album and it doesn’t sound like them. That’s bullshit. I wanted to avoid that and I think we achieved avoiding that.Mark: No. 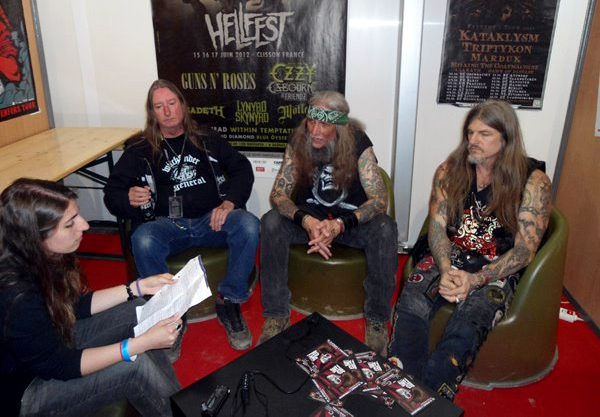 Yes, you did! I heard the new album and you (Wino) sing but you also play guitar on “Lillie”. How did your acoustic track end up in the album?

Dave: My first time was the introduction to “Dependence”. That’s the first acoustic thing I ever did on anybody’s album.Wino: I play guitar on “Vertigo”. That’s it. We knew that there was going to be an intro piece. We needed it; we wanted to break it up a little bit. Make something a little different. So when Dave asked me to work the piece, I said “that’s cool”. And he played acoustic guitar.

Wino: Did I answer the question? (laughs)

Dave: I actually came with that because he wrote “When Emotion Dies” off of “V” album, and I wanted another one, cause that was really awesome. That’s why I said “Do this” and he said “yeah”.

Dave: Well. It’s got a double meaning. If you take it literally, it’s a tranquilizer from the 70s and the 80, and it was my favorite drug. It’s probably still my favorite drug outside of marijuana. But if you look at the concept, the girl is Lillie, female, patient 65 and the album is a concept of the journey the tortured, addicted mind. 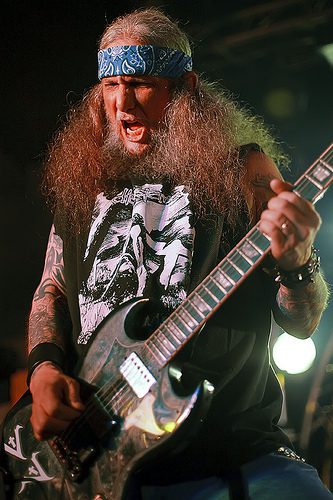 Dave, your guitar playing is very characteristic. Besides Black Sabbath, could you tell me a bit more about your influences?

Dave: Well, I got a lot of my wallow from Mick Box from Uriah Heep and Mark Farner from Grand Funk. And I always liked Buck Dharma from Blue Oyster Cult and Glen Buxton and Michael Bruce from Alice Cooper. But they are more intricate than I could ever be, so I just adopted my style in a punk rock way. Just like playing in my own way. And one of my big influences for my fast paced stuff, that people say as all the right-wrong notes, is East Bay Ray from the Dead Kennedys. And then the whammy bar comes from Blue Cheer.

So, with this new album being a success, do you see more albums coming from Saint Vitus?

Dave: We’re taking it day by day. We‘re very, very pleased with the reception for “Lillie” and you never know what may come in the future. If things go good, sure, if things go bad, no. So, who knows?

Wino: I see it probably happening. The bar is set pretty high. We’ll see that.

We certainly hope to have a new album from you!

Wino: Thank you very much!

I want your opinion on something. Nowadays, bands like yourselves and Pentagram get much more attention than what they used to have, back in their beginning. What do you think of that?

Dave: We‘re in our 50s. Scott will be 51, I’ll be 50. A lot of time has lapped. Our idols were Black Sabbath, and we’re sort of taking their place now. All this time we become influence on people. The younger folks that are talking to us when they come and see us say that they are inspired by us.

Wino: Internet has a lot to do with it. The information passes faster.

Mark: I think the kids got tired of the hip hop and pop. They looked on the internet, saw things of us; checked their parents’ records and they listened to them and said “Boy! There’s something out there” and a whole new world opened up and listened to all the old bands. The hardcore feeling is not so commercial.

So for the summer, you have planned a European tour, along with some appearances in festivals, like today in Hellfest. What else do you have in store for the rest of 2012 ?

Dave: Well, when we get back from what I call festival hop European tour, we have a couple of months off, and then we’re gonna do a full European and US tour. We’ll play in as many places as we can. We’re gonna try and go nonstop as much as possible. We’re going to be pretty much on the road for this whole year.

And of course we’ll have the chance to see you in Greece! 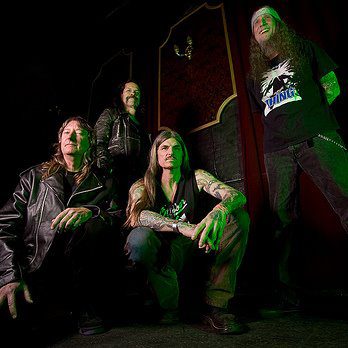 Wino: Greece rocks! Hard! We know the situation is tough. We know there’s a lot of trouble there, but we still go there if we can.

Mark: And you take people’s lives off their troubles for a little while.

We could use that. Do you have any message to send to your Greek fans?

Dave: Basically to all the fans, thank you for keeping doom metal alive, and Saint Vitus alive. We wrote and put out “Lillie: F-65” for you all, so I hope you enjoy it. Come see us live, because you gotta feel it. And you are in the far row, you’ll feel me personally! (laughs)

Thank you very much for this interview!