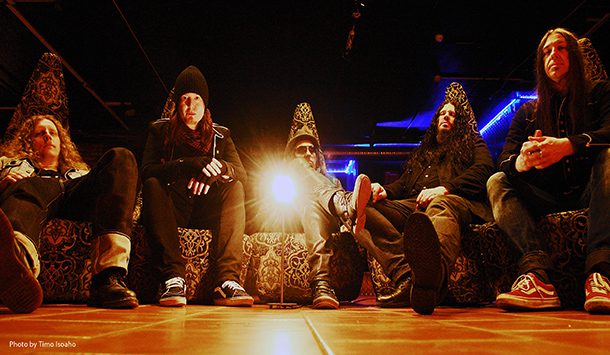 Spritual Beggars returns with their brand new record “Earth Blues” which has been released on April 15th by Inside Out Records. Metalpaths had a short chat with keyboardist Per Wiberg who talks about the new record, the chemistry between Beggars’ and Apollo and the future plans of the band…by Constantinos Giarmadouros

New release for Spiritual Beggars. Are you satisfied with the result?

Yes I am! I like the songs and the production and it gives a very honest picture of what Beggars is all about.

How would you describe the album to the fans that have not listened to it yet and what should they expect?

The mix on this album definitely leans more toward the classic rock end of things with an earthy grit to it all compared to “Return To Zero” which had more of a slick 80’s metal production. The influences have always been the same for this band, our fondness for heavy rock from the 60’s and 70’s in all it’s various incarnations so to me the music is the same style it has always been. The songs are maybe a little bit more to the point and upbeat on “Earth Blues”, whereas “RTZ” had more of an epic feel and longer songs. I’d say the difference lies more in the presentation though.

How did you come up with the title “Earth Blues”?

It’s originally a track by Jimi Hendrix and it suited the album layout.

Is there a special story from the recordings of “Earth Blues” you’d like to share with us?

It was very quick and focused in the studio. We recorded it live with all of us playing in a room together and not using click track. Working this way speeds up the whole recording process and it’s much more fun as well since you get a feel for what the album’s gonna sound like straight away. It was recorded in a small city in the countryside in Sweden and in the evenings we were telling tall tales while drinking spanish brandy, good times!

How is it going now with Apollo in the band?

It’s going great I think and his performance on Earth Blues is really good. At the moment we’re out on a short european tour and he’s doing an amazing job every evening.

Is the bond between him and the band stronger now in comparison with “Return To Zero” which has been the first one with Apollo?

Even though we knew each other before he joined ‘Beggars it always take a little while ’til you feel comfortable. I think “Earth Blues” was an easier album for him to record as we had done a couple of shows for the “Return To Zero” album and that’s really when you learn how the band, music and players work together.

Do you think he’s given his “trademark” to Spiritual Beggars?

Absolutely, I do think the music we play with Beggars demand some other things than the other bands he’s been involved in. It’s cool that he can show how versatile he is as a singer and still keep his “own” voice so to speak.

What are the upcoming plans for the band?

We’re doing a show in Mexico in May and then Hellfest this summer. We got Greece and Japan coming up this fall and hopefully we’ll be able to hit some other places as well but nothing more confirmed at this very moment.

Oh, you return to Greece! We haven’t heard about this yet…

Yeah, we’re coming to Greece this fall and I can definitely speak for all of us in the band when saying that we really look forward to it. Greece has always supported ‘Beggars and hopefully there’s gonna be more than one gig this time.

Do you think that Spiritual Beggars are as recognized as they deserve?

It’s impossible for me to say ’cause I don’t know how recognized we are… People that come to the shows seem to have a good time and really gets into it. That’s the most important part I believe, to take care of the people that support this band. I’ve no idea how this band is viewed upon from the outside so to speak.

If you had one wish for the band, what would it be?

That we’ll be able to fit in another album and some more gigs into everyone’s busy schedules!

The last words are yours…

See you soon, it’s gonna be very cool to come back!