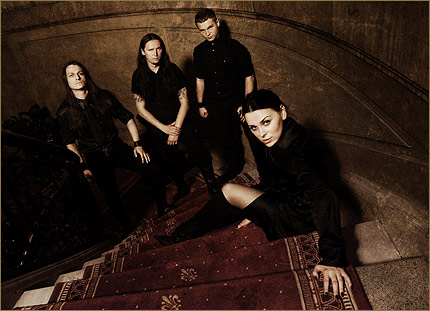 Commented the band: “We’ve been aquainted with Roy for a couple of years. Roy was very fond of our record ‘Transkarpatia’ and he contacted us. Maurice is also a symphonic music fan, which is present on our records.”

DARZAMAT was enchanted with the intro that Mayorga created for his friend Dino Cazares (DIVINE HERESY, ASESINO, ex-FEAR FACTORY). “When we listened to what Maurice created for ASESINO, we had no doubts to entrust to him the work on the intro,” the band said. “After the KING DIAMOND guitar player Andy La Rocque, who recorded the solo to one of the tracks on ‘Solfernus’ Path’, Roy is another wonderful guy who will make a great contribution to our new album.”

Mayorga collaborated on the DARZAMAT intro with the band’s vocalist, Nera. The group explained, “Nera prepared some special soundtracks with her vocals, which were later used by Roy in the intro. It’s an incredible experience to cooperate with this guy! Maybe one day we’ll create something more with him than the intro only. We have a couple of similar musical dreams.”

As previously reported, DARZAMAT has tapped Jonas Kljellgren (SCAR SYMMETRY guitarist) of Black Lounge Studios in Avesta, Sweden to mix “Solfernus’ Path” for an early 2009 release. The new album is being recorded in Poland under the supervision of Jaroslaw Toifl, with whom the band had previously worked on 2005’s “Transkarpatia” (Metal Mind Productions in Europe, MVD in the USA). The drums and guitars are being laid down at HH Poland studio in Gliwice, while the vocals are being tracked at Maq studio. The keyboard parts are being recorded at Spectre’s (DARZAMAT keyboard player) home studio.

“Solfernus’ Path” will include the following songs:

DARZAMAT vocalist Flauros previously stated about the upcoming CD: “For the first time in our band’s history, we’ve decided to create a concept album. It is a certain sort of novelty for us, yet we’ve had such an idea in our minds for a long time now. The coherent story, which is to be told by both the lyrics and the music, is a hell of a greater challenge than composing ten pieces in the similar stylistics. As the action proceeds, the music must ‘react’ accordingly and suitably. It is as if a screenplay, which is to attract the viewer in an interesting way.”

He continued, “The story contained on the record takes place in a mysthical set, indeed, which is created by the mansion of countess Josephine von Kuchmeister, the inspiration for which was the Villa Caro in Gliwice and the palace in Plawniowice. The action of ‘Solfernus’ Path’ takes place at the beginning of XXth century. The main character is a medicine student who undergoes a spiritual transformation. He goes beyond the carnal world and he notices the ‘other side.’ Everything is dressed in fairy-like climate, full of the occult ‘keys.’ Nothing is obvious, nothing here is predictable.

“The title Solfernus is of course not the main character of the story, but it’s eminence grise. The character of Solfernus derives from the play ‘Dalliance with Devil’ written by the Czech dramatist Jan Drda. It is only a tiny inspiration, an impuls where one should not seek any similarities. Drda’s play is grotesque and humorous, while our story is of a completely different character, much closer to Stefan Grabinski’s horror short stories than to the ones of the Czech playwright.”

DARZAMAT released its first-ever live DVD, entitled “Live Profanity (Visiting the Graves of Heretics)”, in North America in August 2007 via Metal Mind Productions (the DVD was released in Europe a month earleir). The disc was recorded at the 21st edition of the Metalmania Festival, which took place on March 24, 2007 in Katowice, Poland, and contains material comprised mostly of songs from the band’s latest album, “Transkarpatia”. Also included is the group’s surprise performance of the song “Diabelski Dom” by the cult Polish metal band KAT, featuring a guest appearance by KAT leader Roman Kostrzewski. The DVD also includes additional footage from the Winternachtstraum Festival, which took place in February 2007 in Arnsberg, Germany, two unreleased tracks, video clips, and an interview with Flauros and Nera.

“Labyrinth of Anxiety” (taken from “Live Profanity (Visiting the Graves of Heretics)” DVD):