DEEP PURPLE: Promotional Video For ‘Above And Beyond’ Single 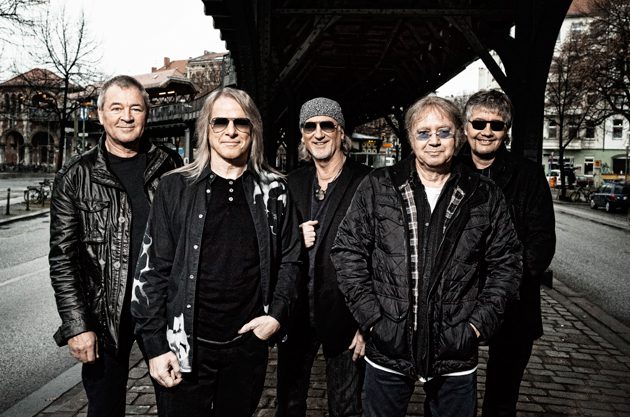 DEEP PURPLE will release the track “Above And Beyond” as a CD-single and on seven-inch vinyl on October 25 in Europe. The single artwork was based on the original graphic work of Black Dwarf Designs.

A promotional video for the single can be seen below.

“Above And Beyond” comes off DEEP PURPLE‘s latest album, “Now What?!”, which sold 4,000 copies in the United States in its first week of release to debut at position No. 115 on The Billboard 200 chart.

“Now What?!”, the 19th studio album from DEEP PURPLE, was released in North America on April 30 via earMUSIC, the Hamburg, Germany-based international rock label which is part of Edel Group.

After various songwriting sessions in Europe, the band recorded and mixed the album in Nashville, Tennessee with producer Bob Ezrin (KISS, PINK FLOYD, PETER GABRIEL, ALICE COOPER, KANSAS). The CD contain 11 tracks, including “Out Of Hand“, “Weirdistan“, “Uncommon Man” and “Above And Beyond“. The latter song references the band’s late keyboard player, Jon Lord, in the lyric “Souls having touched are forever entwined.”

In a recent interview with RadioMetal.com, DEEP PURPLE singer Ian Gillan stated about the songwriting process for “Now What?!“: “There were no rules. We started with nothing, except the right attitude; that’s all. Every day, it was the same routine: the guys walked in at noon and we all worked until 6 o’clock on the writing sessions. We just stopped at 3 o’clock for a cup of tea. After 6 o’clock, we would go home, have a shower, some dinner and go to bed early, even if I’m always up in the middle of the night, writing lyrics. We start at 10 o’ clock the next morning when we’re recording. But the writing is always noon until six. It starts with nothing. Ian [Paice, drummer] and Roger [Glover, bassist] would start jamming, playing for an hour non-stop and trying out some rhythms or grooves. They would stop and say, ‘No, that’s not good,’ then start something else and say, ‘Remember that. Maybe on Thursday we’ll try this again and maybe it’ll be a song.’ Everything emerged from jamming sessions.”