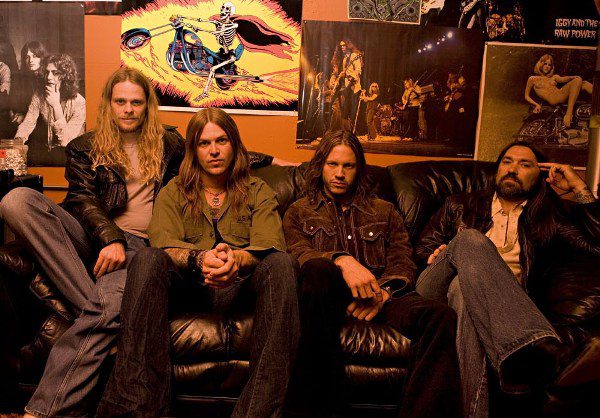 “The Mouths Of Madness”, the video for the title track of the new album from San Francisco-based doom rockers ORCHID, can be seen below. The CD was released on April 26 via Nuclear Blast Records.

Guitarist Mark Thomas Baker stated about the extensive “The Mouths Of Madness”production process: “Most of the tracks on ‘The Mouths Of Madness’ were cut in early June 2012. We were pretty fresh off of our European tour and full of confidence. The basics done at that time were the best recording experience that we’ve had so far. Everybody got along great and did great work.

“We did this album with a completely different guitar sound than ‘Capricorn’. I think it sounds much heavier in that regard. We take a lot of time to get things right. I hope people enjoy it and let it sink in. I think it’s miles above our past efforts.”

Mastering engineer Richard Whittaker, who also took care of the latest BLACK SABBATH andTHIN LIZZY rereleases/analogue transfers, comments: “I’ve been a huge fan of ORCHID since I first heard their debut EP back in 2009, and they’ve certainly come a long way since then. So, as you can imagine, to be asked to work with ORCHID on their records was an honour and a pleasure. They’re a great bunch of guys and a stellar band to be involved with.

“‘The Mouths Of Madness’ is such a well-crafted and awe-inspiring album. Sonically, its 1974 meets 2013 which, for me, takes the SABBATH/PENTAGRAM vibe to whole new level.”

ORCHID was named “the best and most important doom band of the past five years” by Rock Hard Germany’s editor-in-chief Götz Kühnemund. In addition, BEHEMOTH mainman Adam “Nergal” Darski stated: “BLACK SABBATH should do an album like ‘The Mouths Of Madness’!”

Since its inception in 2006, ORCHID — which features in its ranks well-known tattoo artistTheo Mindell on vocals — has achieved massive global awareness with their stunning releases“Through The Devil’s Doorway” (EP, 2009) and “Capricorn” (full-length, 2011).

On November 15, ORCHID will release “The Zodiac Sessions”, which consists of “Through The Devil’s Doorway” and “Capricorn”.   For “The Zodiac Sessions”, both releases have been completely remastered and put on one CD in a lavish digipak featuring an all new cover art, created by the band’s gifted singer, Theo Mindell.

On November 1, ORCHIDwill kick off a European headlining tour alongside labelmates BLUES PILLS and SCORPION CHILD.