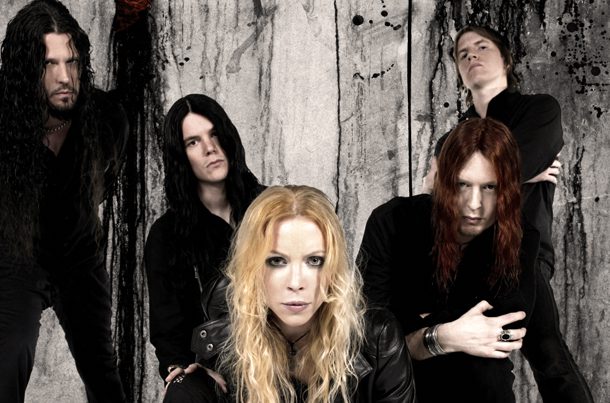 Swedish/German/American extreme metallers ARCH ENEMY are recording their as-yet-untitled eighth album for a tentative late spring/early summer release via Century Media. The CD is being laid down at a few different studios in Sweden.

“We tracked drums at Fascination Street Studio, and we’ve been recording guitars and bass in another room,” ARCH ENEMY guitarist Michael Amott tells Decibel for the magazine’s March 2013 issue (see cover below). “We’ll do the vocals in a third studio, and the mix and mastering will done by Jens Bogren at Fascination Street.”

He adds: “It’s all going according to plan; it’s been running very smoothly. Vocals and [a] few guitar solos left to do, and the mix, of course.”

As was the case with 2011’s “Khaos Legions”, the ARCH ENEMY members are producing the new album themselves.

“We have a clear vision of what we want to sound like, and we can achieve it without outside producers and input, so this works for us,” Amott explains.

Regarding the musical direction of ARCH ENEMY‘s upcoming CD, Amott tells Decibel: “This album is actually very different from ‘Khaos Legions’. All of our albums have had their own vibe, and this one will be its own entity as well. Lyrically, it’s a much more personal record, and musically, I feel the songs have more dynamics and depth than ever before. There’s certainly very heavy and aggressive metal taking place, but there’s also another level of melody that excites me. There’s a wide spectrum of variety in the material; they’re all unique to me and I’m excited about all of them at this point. A couple of the songs feature real strings, and it’ll be interesting how our fans will take to that. I am pretty sure they’ll love it!”

ARCH ENEMY‘s 2012 tour of South America and Mexico was professionally filmed for an upcoming DVD and Blu-ray. German production company Filmefahrer Pictures, known for its work on “2012 – The Movie” and THE VERY END‘s music video for “A Hole In The Sun”, filmed the shows, conducted interviews with the bandmembers and shot backstage footage, fans and other incidentals during the tour.