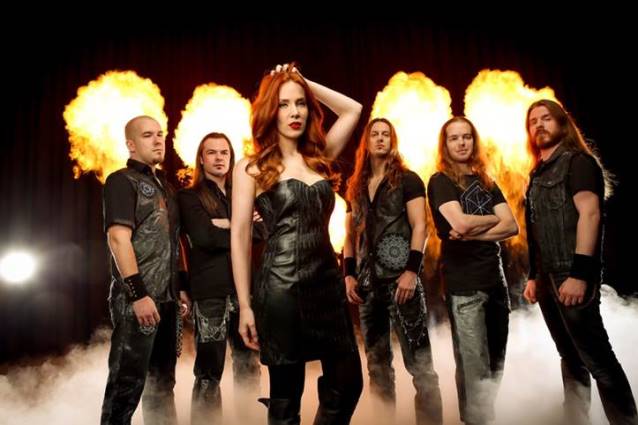 Vintage Vinyl in Fords, New Jersey will host vocalist Simone Simons and guitarist Isaac Delahaye of Dutch symphonic metallers EPICA for an in-store acoustic performance and signing session on Monday, April 7 at 7 p.m. The acoustic set will include selections from “The Quantum Enigma”, EPICA’s upcoming sixth studio album, due out in North America on May 6. Fans who pre-order it from Vintage Vinyl in person or online at VVinyl.com will receive a wristband for the event. Read event details here.

Where the 2013 “Retrospect” performance reflected on a decade as one of the leading bands in the symphonic metal scene, “The Quantum Enigma” marks the beginning of a new EPICA: modern, heavy, and without compromises.

Says the band: “More than any of our previous albums, this album is a group effort. The only goal we had in mind: creating the album that could lift EPICA up to the next level.”

“The Quantum Enigma” was produced by Joost van den Broek at the Sandlane recording facility in the Netherlands. The album was mixed by Jacob Hansen (VOLBEAT, HATESPHERE).

“The Quantum Enigma” will be released in five different configurations:

Disc 2 (digipack and earbook only):

The official lyric video for the song “The Essence Of Silence” can be seen below.

In a recent interview with LiveReviewer, EPICA guitarist Isaac Delahaye stated about the making of “The Quantum Enigma”: “It was very much our intention to really make songs. It was because we started with putting a lot of effort into the basics and we gave a lot of attention to the band part, more so than before. And, of course, Jacob Hansen mixed it and he knows how to do these things. We tried out several people and had them do a test mix of certain songs and he came out on top. It’s become a heavy album, yet all the details are there. Previously, we used to go to the studio, tune our stuff and then we recorded an album. This time we did a long pre-production in the studio and we got to check out a lot of different combinations of amps and then we could record it. Previously, we just did everything in our home studios and sent each other the parts. And after that we would go into the studio and that’s it. But now we sat down together and discussed a lot more, it was more of a band effort. It was working together, rather than reacting. Everyone brought songs to the table, which was very cool. With the previous album, it was mostly Mark, Coen and me writing a lot. And now even Ariën joined in and that made it all feel refreshing. It’s odd to say, but it’s kind of a new beginning.”

Longtime EPICA collaborator Stephan Heilemann once again created the stunning artwork to accompany the ideas behind the lyrics. Once you lay your hands on the album artwork, you will see that the cover is part of a bigger picture.