DARKTHRONE: ‘Black Death And Beyond’ Vinyl Box Set Due In May 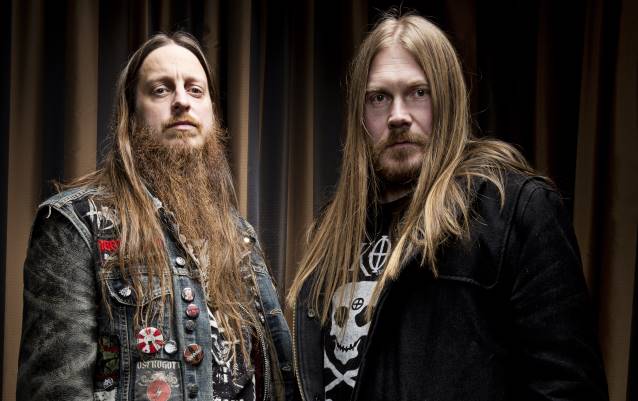 Norwegian black metal veterans DARKTHRONE will release “Black Death And Beyond” on May 12 via Peaceville Records. It is a special collector’s box-set featuring an in-depth book containing extensive accounts of the band’s history and philosophy from both Gylve “Fenriz” Nagell and Ted “Nocturno Culto” Skjellum, as well as additional recollections from bass player Dag Nilsen. Numerous other artists and friends along the way give their thoughts on the legends too, plus the book contains a large amount of personal photos from the band archive. Also included are three vinyls featuring DARKTHRONE‘s own choice cuts from their illustrious collection of death, black, metal and punk classics, presented on white, black and transparent vinyl, plus woven DARKTHRONE patch. All pre-orders of “Black Death And Beyond” also come with a signed certificate from the band.

Fenriz explains the concept behind the track selections: “I never quit my day job; one of the reasons being that I can listen to music on headphones there all the time. To the extent that I rarely listen to music at home anymore, and if I do, it’s like I can’t hear it properly. At work with headphones is where the details reveal themselves and also which songs I can and can’t use in compilations or DJing appear quite clearly.

“Every time I get/buy a cassette or vinyl, I have to transfer them to WAV files via a computer program, then I write a little note to accompany the final burnt disc. But the note first swings by my workplace where I can rate the various songs with a clever underlining system called The Fenrizolator. And so pass the days.

“Then came the idea to do a DARKTHRONE book and with it a vast box set. There was talk about three compilation discs, one with Death, one with Black and one with our other styles. So be it. But this time I took it upon myself do it properly. And to do that… well, I had to face my own rating system. Because I also use the F-olator on regular CDs, it took three whole days to rate all of our 16 full-length albums. Certain discoveries were made, like the song I think is worst by DARKTHRONE is ‘Hans Siste Vinter’ (scoring only 12 out of 60 points) and also that ‘The Cult Is Alive’ is probably our best album — at least it’s the one with the highest grades consistently. But I digress. Aggressive digressor!!! Lists were made, and I truly tried to be as honest and fair as possible. Ted was initially going to do this but I think he suddenly saw how monumental a task it would be, and ended up with — well, what you hold in your hands right now. My ‘best oF’ trying to follow both my biased ratings, crystal logic and also personal favorites and my fave Ted songs.”

This edition of “Black Death And Beyond” is strictly limited to a single vinyl pressing. Once it’s sold out, it will not be re-pressed.

“Black Death And Beyond” track listing:

01. The Winds they called the Dungeon Shaker
02. Grizzly Trade
03. Those Treasures Will Never Befall You
04. Stylized Corpse
05. The Ones You Left Behind