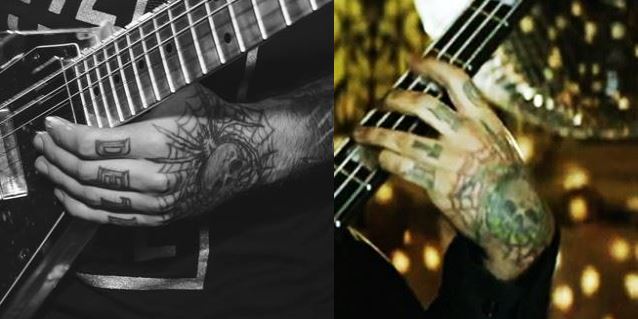 The new SLIPKNOT bassist, who is featured in the band’s just-released video for the song “The Devil In I”, is believed to be Alessandro “Vman” Venturella, who has served as a guitar tech for MASTODON, FIGHTSTAR and COHEED AND CAMBRIA and was also a member of KROKODIL.

A recent interview with Venturella can be found at MusicRadar.com.

A side-by-side comparison of Venturella‘s disctinctive hand tattoo tattoo and that from the person posing as SLIPKNOT‘s new bassist in the “The Devil In I” video can be seen on this page.

SLIPKNOT is rumored to be no longer working with Donnie Steele, the group’s original guitar player who has been playing bass since they resumed touring in 2011.

The identity of SLIPKNOT‘s new drummer is still a secret, although it is widely believed to be Jay Weinberg, son of longtime Bruce Springsteen drummer Max Weinberg.

SLIPKNOT singer Corey Taylor confirmed earlier this week that the band’s new drummer and bassist will both wear the same generic mask onstage.

SLIPKNOT‘s fifth studio album, “.5: The Gray Chapter”, will be released on October 21 via Roadrunner. It is the band’s first album without bassist Paul Gray, who died in May 2010, and drummer Joey Jordison, who was dismissed in 2013.

SLIPKNOT announced in December 2013 that it had parted ways with Jordison. The band has not disclosed the reasons for Jordison‘s exit, although the drummer issued a statement in January saying that he did not quit the group.