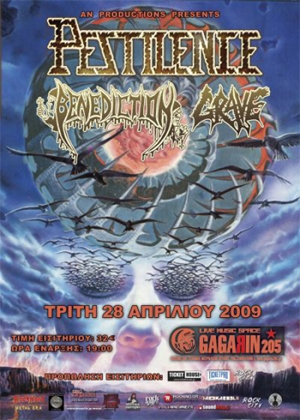 3 Different death metal pioneers united to give a special and unique live show for the lucky Greek fans that joined this gig. Representing 3 countries, each one with a different history in the scene.

Openers Grave visited our country for the first time supporting their latest release ”Dominion VIII” and showed why they still remain until today, a band that can give a great show, without being overractive or talkative until boredom.

They simply delivered a good lesson of how swedish death metal sounds live, played by the most experienced, for the most ambitious, meaning the fans. They had a great variation of songs, from all the albums, fast ones, slow ones with doomy parts, mid-tempo swedish nightmares and a great sound as a good background.

Ola Lindgren is not the kind of rolling around the stage performer, but does his work amazingly correct, having with him 3 partners who can drive the band to a high level for may more years to come. All fans were more than satisfied and the mosh took good place mainly in the most known songs of the band.

Then it was time for England’s Benediction to come to stage. In antithesis with the other two bands, the Grind Bastards came to our country for second time. Fisrt time was as a support to Deicide in 2001, followed also by Mystic Circle.

Having seen them then and also last October in Sofia, Bulgaria with Holy Moses and Nominon (Vocalist Dave Hunt was wearing their tour t-shirt), i can assure you for some things: First of all, the band is in excellent shape the last years, maybe the best in their hole career so far. Second,the new songs from the last album ”Killing Music” work perfectly live.

And also, they really seemed to have amazing fun. The crowd was under frenzy, as they couldn’t believe where all this raw energy was coming from. Truly the best band of the show with a long and great setlist, covering all albums, excellent choices and sweat all over the place. Just have a look on the song choices and you will definitely get the picture. I already miss them but i hope they come soon with their rumored forecoming album.

Selist:
The Grey Men
Controlopolis (Rats In The Mask)
Nightfear
Nothing On The Inside
Shadow World
Unfound Mortality
They Must Die Screaming
The Grotesque
I
Burying The Hatchet
The Dreams You Dread
I Bow To None
Dripping With Disgust
Suffering Feeds Me
Magnificat
Jumping At Shadows
Subconsciious Terror

In the end, it was about time for the mighty Pestilence from Holland to enter the stage. Many people had been waiting for years for the band to come. The news of the group reforming and releasing a new album was nothing but a great motive for all fans to become aware and show interest again.

The new album ”Ressurection Macabre” was represented more comparing to the other 4 studio releases, but all albums had a song representation (unfortunately the first -and maybe best album- ”Malleus Maleficarum” only with one song). To be honest, i expected something better than what i finally witnessed. No,they were not bad at all, i think that something was missing, exactly the same filling i had when i listened to the last album. The good thing was they had a good sound and a godly rhythm section, with Tony Choy proving why he is one of the best bass players ever and Peter Wildoer being a great and steady drummer.

I will see them in France in a month, so more details are to be soon published.