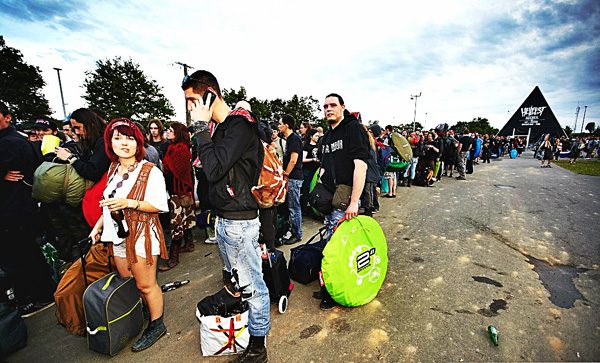 Friday morning and the first bands were to come on stage at 10:30. But we chose to skip a few since we wanted to see what else Hellfest had to offer. We passed the really high entrance (which in the morning wasn’t that impressive) and what we saw was a chaotic space. In front of us stood a huge cross and a few also huge lamps, for the illumination at night. Lots of bars here and there, some very uniquely designed stands for the Hellfest merchandise, a food area where you could find anything you wanted to eat, and of course the “Extreme Market” with tons of vinyls, CDs, t-shirts; anything a metalhead would want. But what a metalhead wants more is music, so we, four editors of Metalpaths, spread to the stages to listen to some metal! Enjoy!

It all started when we entered the fest grounds where the stages were, hearing Benediction kinda close to us. I had confidence and a happy feeling for the upcoming days and the bands that I was about to see. We all saw Benediction but to be honest their sound wasn’t that good. Besides we were just settling down, so I couldn’t see the band properly. Nevertheless, they played songs from their entire discography and they closed with my favorite song of them, “They Die Screaming”.

After Benediction I was hanging around the fest area and went again to the same stage that Benediction played before (Altar Stage) and BOOM! What a blast! Gorod started playing the second that I stepped into the stage and what was that! Great sound, huge audience (Gorod are French), great performance on stage and if it weren’t Lamb Of God and Behemoth, I would be sure that Gorod was the best band of the fest! Great songs like “Birds of Sulphur” and “A common hope” which became #1 on my playlist after the fest was over! They had some issues with their engineers and they sadly lost a part of their set but it was ok for me and for their hard core fans!

It was 13:30 when I was going to “The Temple” stage for Solstafir’s performance. These guys are coming from Iceland and their music is a mixture of black/post metal with a few progressive rock elements here and there. Their latest release “Svartir Sandar” took my attention and it was a great opportunity for me to see them live. I was surprised by the fact that even though Solstafir are not that famous, there were a lot of people waiting for the show. At 13:35, they hit the stage with “Ljos I Stormi” from their latest release and for the next 40 minutes they gave a show with a playlist including songs mostly from “Svartir Sandar” having a good sound and a nice performance overall.

It was time for Unisonic. I’m a huge fan of Helloween and I’ve seen them with Derris two times some years ago. So, you may imagine my passion and impatience to see in the same stage the first Helloween’s main-man with the legendary guitarist Kai Hansen. The intro song started and also our enthusiasm raised rose as we heard the classical piece “The Ride of the Valkyries” by Vagner (yes the classical composer!).

They started with the homonymous track “Unisonic”. I figured out that Kiske’s superior voice keeps in high standards even if he lost some of the high tones. We knew that the setlist would consist of songs from their first album, but they couldn’t forget Helloween songs. The crowd was nearly pleased with Unisonic’s songs, but in “March of Time” and “I Want Out” felt ecstatic making moshpits and banging their head with passion. At the end, metalheads enjoyed the performance and they were leaving the place with a big smile in their face.

Gorod got me really excited and I headed to the “Main Stage 2” where Heaven Shall Burn were about to play. I heard the opening track of “Antigone” which is an intro called “Echoes” and suddenly they started playing “The Weapon They Fear”. I couldn’t last any longer so I went into the pit to have some proper fun! The sound they had was not the best surely, but it was good enough to hear every song. Great set list with songs like “Counterweight”,”The Omen” and “Endzeit”. HSB knows how to move on stage that’s for sure.

It was time for my first visit to “The Valley” stage to enjoy some good stoner metal. I didn’t know what to expect from Orange Goblin, since I had never seen them before. And what I saw blew me away.

The band was so energetic, giving their best to a crowd that was cheering, headbanging and crow-surfing all the time and one hell of a frontman! The set was based mostly on their last album “A Eulogy For The Damned”, but we also heard “They Come Back”, “Quincy The Pigboy” and “Blue Snow”. The best was kept for last. “Scorpionica” closed the set and left us with the best impressions.

Right after Heaven Shall Burn, I went back to the “Altar Stage” for Cannibal Corpse who did well with good sound, people moshing and Corpsegrinder headbanging like hell. It’s been a while since last I saw them playing live and they kept me happy, listening to songs like “Make Them Suffer”,”Hammer Smashed Face” and “Demented Aggression”.

Next in line were Satyricon. Lots of smoke coming from the stage, and an incredible intro prologued “Now, Diabolical”. Satyr and Frost had us headbanging in no time with a set full of classics. I would like to hear something from “Dark Medieval Times”; instead I got “Hvite Krists Død”, “Mother North” and “King” among others. Not bad at all!

It’s time for Dropkick Murphys to hit the “Main Stage 2” and I have to mention that the Bostonians have been the first in line of my “must-see” list! “The State Of Massachusetts” is the first track of the night and the party has already started! The rumors that wanted them being a great live-band are now proved right in front of my eyes: Dropkick Murphys definitely reached my expectations.

Being in a great shape, Murphys’ set-list included songs from their entire career plus a new song from the upcoming album and a cover of AC/DC’s all-time classic song “T.N.T”! “Johnny I Hardly Knew Ya” has been the first hit of the night and what happened can’t be described with words. Dropkick Murphys knows how to make the crowd go crazy: it’s that passion and energy this band breathes out that nobody can stop jumping, dancing and singing. Scruffy hit the stage with his bagpipe and it’s the self-titled “Going Out In Style” from the last album that continues the party. Next is “Rose Tattoo”, a brand new – unreleased yet – song from the upcoming album and the fans’ reactions has been really positive.

My enthusiasm was in the highest level, since Megadeth is one of the bands that I grew up with. As soon as Dave’s imposing figure was on stage, they started with “Never Dead” from their latest album “13”. The audience was languid but started to wake up during the older songs. Especially in “She-wolf” I can remember myself making a moshpit and others came inside.

The truth about Megadeth is that we, as Greeks, haven’t enjoyed them in Greece properly because of low performance of the group or by sound problems, but this fucking time the performance, the setlist and sound were just perfect. Even Dave who has a problem with his back couldn’t stop headbanging. It was a shocking performance. At “Peace sells” Vic appeared on stage to claim his part of the glory. Maybe the negative in the sound was that Mustaine’s voice had some face out, but who cares… Megadeth demolished the stage and made a solid performance.

The first day of Hellfest would end gloriously for me with no other than King Diamond himself. And with him participating in only two summer festivals, I consider myself really lucky to have seen him.

Right on time the set was ready and was revealed to us. The facade of an old mansion in the back and an iron fence separating the band from the fans. It’s not easy to describe what happened after that. King Diamond on stage was mind-blowing. His voice was in an amazing shape, hitting all the falsettos correctly, and the quality of the sound enabled us to hear every single detail of the songs. Unfortunately, I can’t say the same for the female vocals, because, even though unnecessary, they were completely lost. But the result stays the same.

King Diamond offered us a show that we won’t forget easily; awesome songs, great performance, enriched by guest appearances (we even saw Grandma on stage!), and a quite hurtful experience for our own voices, as we tried to high the notes King did.

The first day of Hellfest ended royally with King Diamond. The light rain that was going on during the half of the day discouraged no one. After this enjoyable, yet tiring day, it was time to give our ears, necks and backs a break. As we were heading out, we saw an impressive fire show on the main entrance, and everybody stopped to take a photo or a video, whatever they could. The only remaining task was to find our tents and enjoy a good night sleep. The next day was only a few hours away and the thought that we would see Machine Head, Behemoth, Death Angel and so many more, kept our excitement to the top!