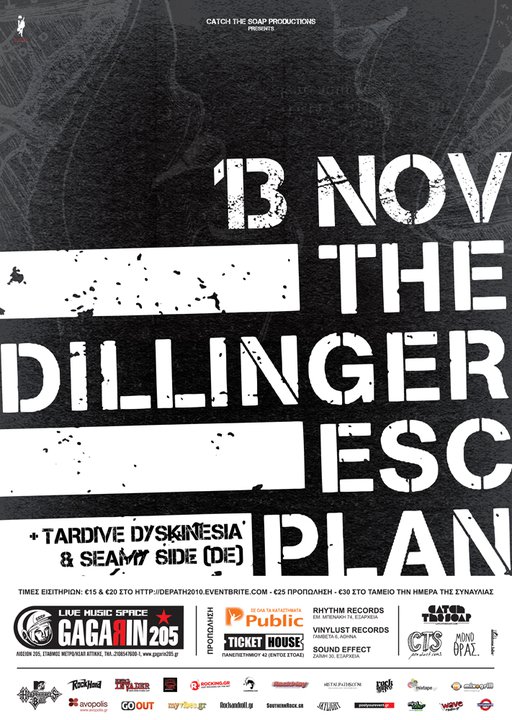 That was something we really didn’t expect… I mean, we knew it was going to be something special but in terms of objective speaking, it seems as if logic died that night in Athens when The Dillinger Escape Plan played for the first time in Greece. We’ll manage to put down what happened, though we have to mention there was a German band called SeaMySide that played about 25 minutes and really made it. They made us feel tired from the very beginning. This pointless deathcore style did no justice to us and them, plus the fact that the drummer which was really good had a horrible sound in the double bass, and you have the very first disappointing picture of what we saw. The only great thing was the t-shirt of Dead Swans worn by the guitar player. Maybe some other time guys, as far as I can tell, I ain’t gonna miss you at all.

Tardive Dyskinesia is the joy of the middle modern metalhead as I have stated many times. One of the ten best bands our country has ever produced, they caught us from the neck and started pushing us up and down from the very beginning. ”Triggering The Fear Reactor” will always be their trademark song, no matter what they’ll do in the future. The sound is by their side and their performance is outstanding. We can’t help but banging our heads constantly in tunes such as ”Downfall” or ”Complicity” and the whole 45 minute experience proves that the band is in their best shape. More are yet to come. Their tour with Pro-Pain has given them certainty and experience. They are so afar from other bands that they only can be harmed by theirselves. Not a chance. I bow down to the future. Excellence!

The Dillinger Escape Plan are in the high peak of their career so far. Their last album ”Option Paralysis” is already critically acclaimed worldwide and entering ”Farewell, Mona Lisa” will ALWAYS stick in our minds as one of the most bombastic beginnings. The guys are totally out of control. Guitarist Ben Weinmann and Jeff Tuttle bang their whole bodies from the first second. They climb to the speakers and jump in tactical time schedule, they even pour out salival from their mouths. Total OBSESSION! Bassist Liam Wilson looks like Ian Hill from Judas Priest as if he is stil somewhere around 25 and not standing in his corner as usual. He seems the most calm of all, giving great help to the phenomenal drummer Billy Rymer. Mister Chris Pennie, you may fuck off big time anytime you like (I always wanted to write this one)!

As far as the frontman Greg Pusciato is concerned, from the moment he opened his mouth, he saw he was very happy to be in Greece, giving a hand to each fan he could and turning red with his screams, grunts and moans. Next were two tracks from ”Ire Works” of 2007 with ”Fix Your Face” and ”Milk Lizard” bringing lunacy and the crowd singing the choruses as loud as they can. Two more from the new record for the go on with ”Room Full Of Eyes” and ”Chinese Whispers” being played one after the other just like on the album. And the first great moment of paranoia was ”Sugar Coated Sour” from the monumental and best album they will ever make ”Calculating Infinity”. If only I could describe what happened… I only remember being violently pushed and repeating more violently as an answer. No offense at all, we’re all like family there.

To make matters worse, comes ”Destro’s Secret” also from the debut album. I love DEP but these were the glory days. Total anarchistic music for frenzied minds. Period._ Two more new tracks follow, being ”Gold Teeth On A Bum” and ”Widower” were we all embrace the one next to us and the atmosphere getting a little…romantic (!?). ”Black Bubblegum” from ”Ire Works” was one of the songs expected to be played and ”When Good Dogs Do Bad Things” from the phenomenal EP ”Irony Is A Dead Scene” featuring Mike Patton on vocals, brings chills and dementia to the old fans. Unbelievable and totally played in the right moment. What a crush… Another new one called ”Good Neighbor” and another one from the previous album called ”Lurch” before the end of the gig turned to something really indescribable and special to our hearts.

For it’s ”Sunshine The Werewolf” that marks the beginning of the holocaust, with Pusciato literally climbing to the speakers at the left edge of the stage singing the song waving his hands to the upper floor of the club and jumping down (!!!!) after the end of the song. That was the end of the normal set, but there was also a divine encore. With ”Mouth Of Ghosts” from ”Ire Works” being the intermission to the older songs, and ”Setting Fire To Sleeping Giants” starting a large moshpit, before the place is smashed down with the last three songs of the night. ”The Mullet Burden” was the greatest surprise, representing the EP ”Under The Running Board”, but it was ”Panasonic Youth” that tore the place apart and ”43% Burnt” that ended the massacre.

Presence on the scene? Performance? Direct Playing? Tied band? Traumatic Childhood? Damaged Drugs? Sanitarium Convicts? All of the above? None of the above? Who gives a shit anyway. The Dillinger Escape Plan live in Greece Anno 2010! End of transmission. Gotta find my removed and put sideways brain. The one who’ll find the ball, may return it so the game can go on? Somebody? None? I thought so… Don’t fuck with them, they’re going to mangle your mind so much you won’t believe it. The most ferocious live experience in nearly 30 years of life. Enough said!