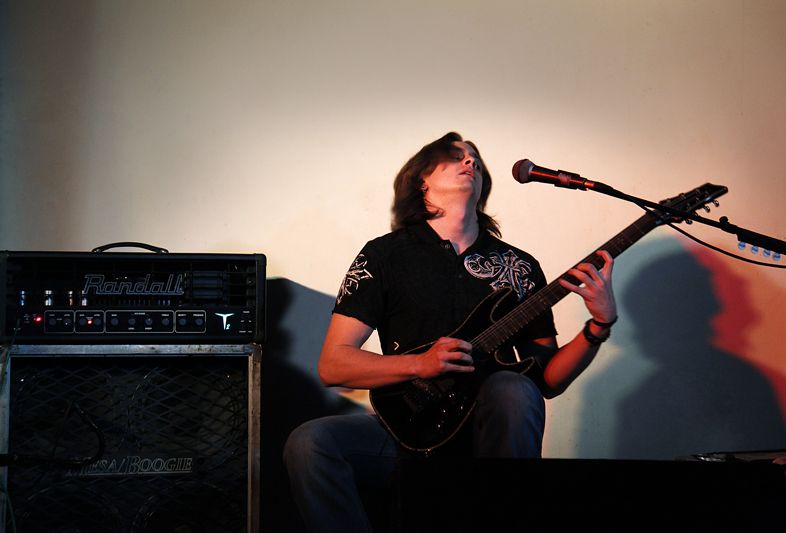 Gus Drax is the guitarist of two Greek bands, Sunburst and Black Fate, and of UK based Biomechanical (which are now on hiatus). His work in all these three bands, as well as his exceptional solo album, “In Search Of Perfection”, has given him a place among the best guitarists of Greece. So, last Sunday presented a great opportunity for guitarists and guitar lovers generally. 7 Sins club hosted a guitar clinic, and Gus travelled from Larissa to Athens to share his knowledge with us.

It was around 6:45 when Gus Drax hopped on the stage of 7 Sins and welcomed us, with his two 7 string guitars waiting on the side. The program would have it all. Songs of Sunburst, Black Fate and Biomechanical, tracks from his solo album and of course questions. The only negative thing of the night was the low attendance; way too low, considering the price (5 Euros isn’t much) and the fact that the event started quite early so that nobody would have problems catching the bus/train/metro afterwards. Thankfully though, this didn’t seem to put off Gus, who was in a great mood, joking around from the beginning. The event started dynamically with two tracks from his personal work, “Kiss Of Life” and “The End Of Innocence“. In between the tracks, Gus addressed the audience for questions and, of course, the first ones concerned the way he composes music, his endless practice and how the practice with a classic guitar can help you 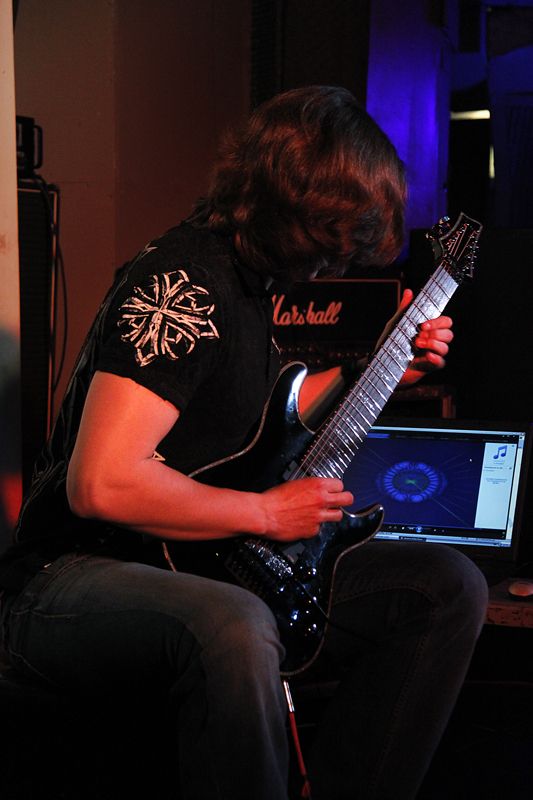 strengthen the fingers and improve some techniques. He also mentioned that if you want to practice on your favorite guitarists, books are not enough, and you have to pay attention to videos too. A few more technical ones were about the reduction of the noise and how he maintains the vibrato. His endorsement with Schecter could not be left undiscussed, of course.

The music part continued with “The Symbol Of Life” of Sunburst, and Gus let us know that he’ll be in the studio with this band in May and after that the second solo album will follow, with both Greek and foreign guest appearances. More technical questions followed, such as what kind of picks and petals he uses, his bending and left hand tapping techniques and his thoughts on free improvisation. He continued with more songs from his solo album; the funky “1000 Night”, “Hourglass”, “In Presence Of The Dead” and the ballad “In Loving Memory”. We later found out about Gus’ influences, which include Jeff Loomis, Jason Becker, Marty Friedman, Chris Broderick, Chris Oliva and of course John Petrucci. We also found out his favorite metal voices and his favorite Greek guitarists, when a fan posed the most intriguing question of the event; if you had to choose between a jam with your favorite guitarist and a night with your favorite celebrity, what would it be? Needless to say that Petrucci won over Kate Beckinsale!

It was time for some music again, so we had the chance to hear “Beyond The Darkest Sun” of Sunburst, “Call Of The Wild” of Black Fate, “Fallen In Fear” of Biomechanical and again Sunburst with “Break The Core”. After that, the talk passed to more general matters; the try-out of Vasilis Georgiou, singer of Sunburst, for Kamelot, replacing Roy Khan, and the effect on Sunburst if he had succeeded, Satriani’s lawsuit against Coldplay, the importance of looks and work out. Bonus of the event was a new song that will be included in the next album of Black Fate, “Perfect Crime” and as we were coming closer to the end, we also heard Biomechanical’s “Regenerated” and “Vitality”. 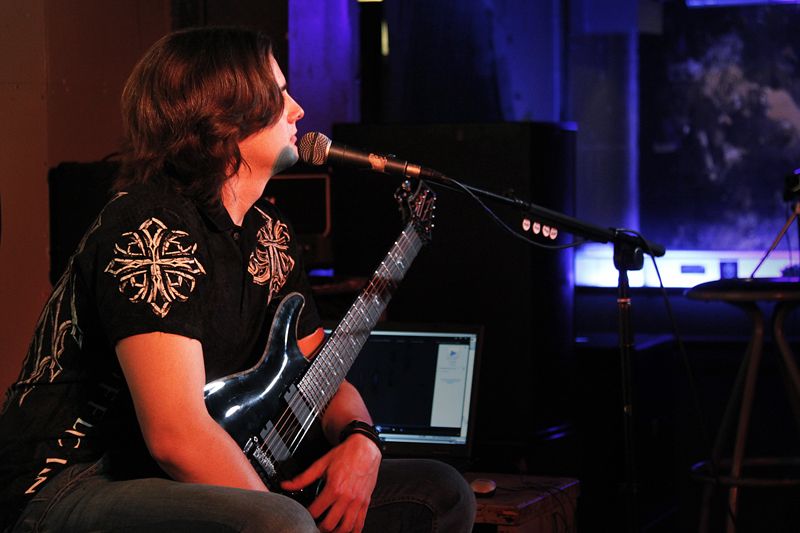 After 3 hours and 45 minutes, Gus Drax thanked us with a promise of doing something like that again. The number of the tickets sold might not show success, but Gus Drax and the few that attended the event had great fun. Let’s hope though that the guitar clinic in Thessaloniki will do a lot better.