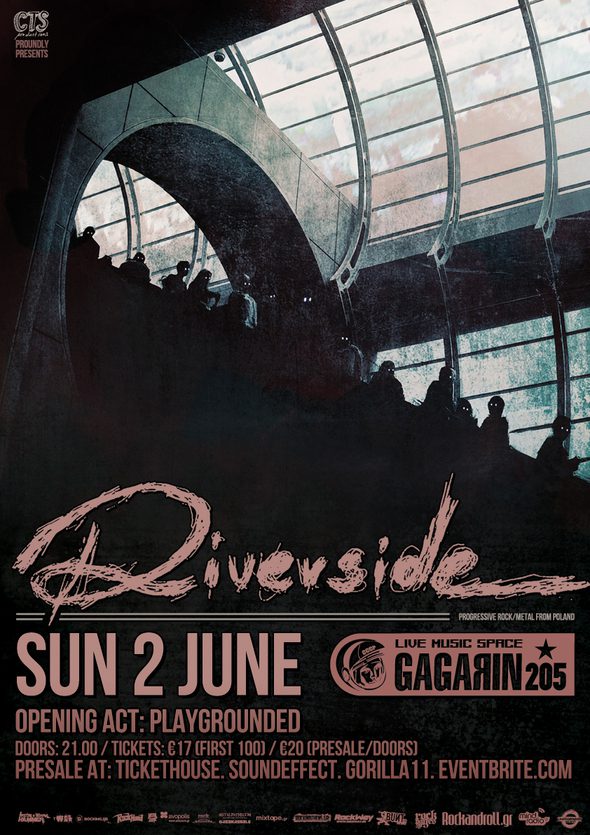 Sunday night was THE night for the lovers of the progressive sound. Three years after their latest visit in Greece and with a new and exceptional album at hand, Riverside decided to come to Greece once more. And with a little over ten years of existence and five great albums, they showed us why they are rightfully considered one of the best progressive bands.

The doors of Gagarin were to open at 21:00 and I arrived at the venue 15 minutes later, only to find Playgrounded, the opening act, on stage and already halfway through their set. The first thing I noticed though, was that the band was really cramped up; they were literally taking only 1/4 of the stage, as most of the space was occupied by the drum set and keyboards of Riverside. Apart from that, their appearance was decent, with a few sound problems. Since this was the first time I saw them live and listened to their work and since I managed to see them only for 15 minutes, I can’t say much. But Playgrounded definitely earned a warm applause at the end of their performance.

For the next half hour “Night Session Part 1 & 2” from “Shrine Of New Generation Slaves” would keep us company. A few minutes after 22:00 the Polish appeared on stage, accompanied by the cheering of the fans. “New Generation Slaves” opened the set and it was clear that the set would naturally be based on the new album. “The Depth Of Self-Destruction” and “Feel Like Falling” came to prove exactly that. The sound was great, apart from some minor problems here and there, the lighting was also great and the crowd below responded with cheering and applause to every motion and solo coming from the band. As for the communication between band and fans, Mariusz Duda undertook all the work. He had even prepared a whole speech in Greek! He had help by a little cheat note of course, but he had us laughing with his every word. I have to say, though, that his pronunciation was pretty good! After that little break, Riverside continued with “Driven To Destruction”, “Living In The Past”, “Egoist Hedonist” and “02 Panic Room”, the representatives of older albums. And it is such a delight to listen to great songs that become even greater when played live. Every member of the band had its moment of shine, as we went from a guitar solo, to a bass solo, to a keyboard solo. Michał Łapaj was simply astounding on the keyboards, even though his leg injury had him sitting during most of the set. With the next song “Escalator Shrine”, we returned to the latest album and closed the main part of the performance. After a couple of minutes, Riverside came back on stage for the traditional encore, with “Left Out”. And since one encore wasn’t enough, the band left and reappeared for a second one, informing us that they had two more songs for us! “Conceiving You” and “Celebrity Touch” gave the fans more than what they were asking for.

What is there to say about a live show like that? The nearly 400 people that were in Gagarin (a low number for Riverside in my opinion) enjoyed a 2 hours show that was amazing from every aspect. Riverside, at the peak of their career up until now, gave a stunning and altogether professional performance, which I hope will be surpassed by their next one.