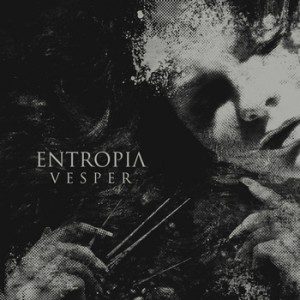 Essentially, Polish band Entropia is entirely new to the heavy metal scene. With the exception of their 2010 EP, “Chimera“, this group has remained out of the public eye. None of the band members have been involved in another listed musical project, nor have they garnered much attention. However, with their newly released full-length album “Vesper“, some more awareness is to be expected, especially with the exceptionality of its content.

The whole record flows together skillfully from song to song. Each track is distinguishable from one another, while maintaining the general ambiance of the album. It begins with “Dante”, which sets the album into perspective extremely well with progressive, upbeat music and raspy, desperate vocals. As Vesper continues, it remains despondently beautiful with enough grit to avoid being the soundtrack for one’s depressive haze. Tracks such as “Gauss” are layered with both Marek Ceńkar and Michał Dziedzic’s voices underneath a tirade of fast-paced guitar work and blast beats, while somehow retaining that calm composure. In fact, the entire album seems to play on that formula: percussive and driving without being abrasive in the least. But, by far, the best track on the album is the last. “Marat” gives the listener a sense of finality while harnessing a more forceful edge to it. Even with the keyboards accenting the music, it serves as a strong closer and ties the album together.

“Vesper” is surprisingly low-key, and utilizes a lot of different elements. It provides a solemn atmosphere that manages to sustain the heaviness of their black metal roots without forsaking the shoegaze that also spawned their sound. Entropia has developed this sound thoroughly, even within the scope of their first release, and it is painstakingly polished. Nothing about this album is out of place. The production is not smooth enough to be perfect but retains that black metal element of minimalism that is so very important to the tone of the music. However, no specific section of the instrumentation is ignored or used to overpower the others.

One of the most striking features of this album is the dynamic of the instrumentation. Each member has figured out their particular part to play in the music and do not overstep the boundary. The use of the keyboard is not at all underutilized, but nor is it too much. Many bands seem to make the mistake of going to one extreme or the other, but keyboardist Damian Dudek does not make himself the highlight of the music. The keyboards are supplementary and add a chilling touch to each track without forcing it into a symphonic direction. Guitarists Michał Duda and Dziedzic complement each other and do not divert onto separate riffs but, rather, create a wall of sound, which is solidified by Ceńkar’s bass playing. But the percussive aspect was central to the entire album, and drummer Patryk Budzowski delivered without overpowering or energizing the music too much.

This sedate, but intriguing, album is a fantastic starting point for this band’s career by proving what these five members are capable of doing. Vesper was an absolute pleasure to listen to and, hopefully, Entropia will continue on this path.