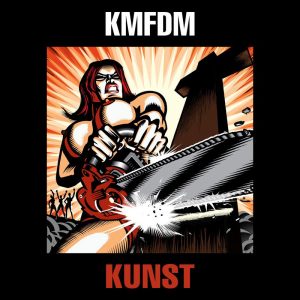 I am very happy that I finally have the chance to review an album by KMFDM (Kein Mehrheit Für Die Mitleid) which is translated as ”no pity for the majority. The German industrial group, under the endless quests of mastermind Sascha Konietzko to experiment with all possible rhythms of electronic industrial music, has already reached its eighteenth (!) album since 1984. It’s needless to mention that the success of KMFDM has brought them to many peaks in their career, from touring with Ministry in 1989 to selling great amounts of albums from the mid ’90s to the end of the decade. They have pretty much seen and done all a band can dream about.

Even the split-up of 1999 didn’t manage to stop them, Konietzko picked up the pieces of the band and in 2002 we had the return of the band. Now, two years after ”WTF?!” we have the new album simply entitled ”Kunst” (German translation for art). With another great cover from the band’s longtime cover artist Aidan ”Brutel” Hughes, where we have a chainsaw-wielding amazon, in order to support the Russian punk rock band Pussy Riot and an Ukrainian protest group called FEMEN. There’s also a track called ”Pussy Riot” in support of the Russian band, which also happens to be one of the best of the album with its totally catchy addictive chorus.

Konietzko once again does miracles and doesn’t only prove he’s a skilled polyorganist, but also a man with vision who keeps on doing what he likes the most. This is the kind of band and album that would drive a middle metalhead red from anger, so a very probable turn of events is that many metal fans will bury the album and accuse KMFDM of being a lame and cheesy band. On the other hand, when some of them so-called thrashers or deathsters are attending clubs only to have a chance to get laid with a gothgirl and wait for hours listening to much worse EBM or electro stuff compared to KMFDM, it’s all ok, right? Who gives a fuck for them anyway?

”Kunst” begins with the title track giving the right tone. It won’t mind if you like this album, if it’s a break from possible blast-beating or thrashing you put yourself into most of the times. It’s another very good album from the Germans and it shows that Konietzko and Lucia Cifarelli are not only fit as a married couple, but also in the same band, as their voices change where needed and give the best possible outcome to the material of ”Kunst”, with tracks like ”Ave Maria”, ”Quake”, ”The Mess You Made” or the closing ”I <3 Not” being the best among equals, in a very enjoyable album as a final aftertaste.

Many pure metal bands would wish to have released such a good album like ”Kunst”. In a time where many bands recycle their sound or dare failed experiments just to reach wider fan-base, KMFDM continue leading the lonely road they’ve been heading out the last three decades. I bet many tracks of the album can find a place in the band’s new setlist. If all of the above is bullshit to you, a simple listening of ”Kunst” could convince you for the opposite. Just in case you feel like digging the band for the first time, check also some of their live videos, where you’ll be totally blown off. If this is the German industrial form of art, I’m all by Konietzko’s side.