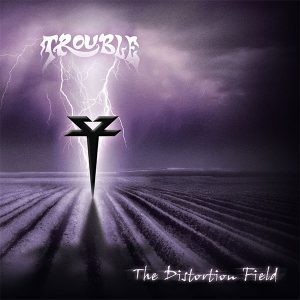 In my opinion, classic doom began with the birth of two bands; Candlemass and Trouble. Besides Black Sabbath who manufactured the concrete to create doom, those two bands took the concrete and created the legacy. Trouble’s ‘Psalm 9’ was so innovative for its age that, ’till now, along with their self-title record is considered as their best. During the decade of the nineties, Trouble’s original vocalist left the band only to come back later and leave again in 2008. Kory Clarke joined in but left the band again to be replaced by Kyle Thomas. With Wagner the band closed the past decade with a crappy record (Simply Mind Condition) and returned in 2013 with Thomas and a record titled ‘The Distortion Field’.

I wasn’t expecting much from Trouble any more but I was curious to figure out if the band will return back to their throne as doom kings again. ‘The Distortion Field’ gave me hope to expect something good this time from Trouble, as I’ve listened three songs of the record online streaming and got quite excited. Unfortunately, I cannot say the same thing anymore. The record numbers thirteen songs, which leads in one hour of music. For me, the record is far too long, and the band should have released an EP instead. Many songs are considered as fillers and the record can’t be listened as a whole easily.

As far as the music style is considered, ‘The Distortion Field’ is a heavy metal record, not a doom one. The band plays groovier guitar riffs and heavier. The new vocalist, Kyle Thomas, did a remarkable job in my opinion. His voice reminds me of Dio only with a shorter range (oh heavy metal gods I cannot say that, can I?). I think he fits quite well with the band and the music, but that doesn’t mean the record becomes less lame because of him. To be fair, I liked a lot of songs of the record. Some of my personal favorites are ‘When the Sky Come Down’, ‘One Life’, ‘The Greying Chill of Autumn’ or ‘Sucker’. Those songs keep the doom feeling the band managed to create in the past decades. ‘One Life’ especially begins as an acoustic song which progresses in a heavy, slow doom tornado. ‘When the Sky come down’ too!

On the other hand, the whole record feels like nothing special and innovating. We have ‘Have I told You’ which is an acoustic song and also lots of fillers. And when I say lots, I mean about twenty minutes! ‘The Broken Has Spoken’ or ‘Sink or Swim’ approaches a more catchy song’s style, with moderate heavy rock rhythms. Additionally, the lyrical themes were expected; Christian themes and social criticism.

Listening to the record, I would say that the doom lovers and the most loyal fans of Trouble will found ‘The Distortion Field’ pleasant and worth to listen. However, the record isn’t something more than the previous stated. I feel like I needed more unique riffs and something like a strong EP with four or five songs which can keep the interest in intense levels.