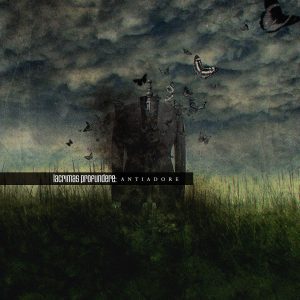 Coming from Germany, Lacrimas Profundere happen to be of those bands that remained a step below recognition or lets say of lesser fortune and fame. Since anno 1995 when their youth-fed hearts were run by doom/death blood, to their latest release of gothic and dark rock/metal they haven’t made the bigger step, nor have they made the ultimate release to shake their genre’s silent waters.

Their future sounds uncertain after listening to “Antiadore”, their tenth studio album. Their gothic flair of sullen hard-driving riffs accompanied by light melodies, is still here but I feel that this record sees them going through the motions and actually offering a big nothing to their fans.

Apart on the album’s opener “My Release In Pain” where harsh vocals reappear- almost as a throwback to the band’s death metal growls of yesterdays, there’s nothing in here to introduce any form of difference or evolution.

Unfortunately and quite sadly, I have to say that HIM and The 69 Eyes are so present in their sound, that it makes me hear and swallow these sounds with ultra-puke gestures! Nevertheless, fans of those acts should find them satisfying (but not myself)..

“Antiadore” sounds very much like a band about to give up! Not my cup of tea. Strictly for HIM lovers…