Ministry
From Beer To Eternity 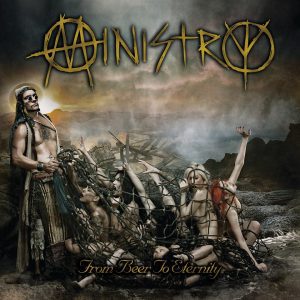 This is it! The end of Ministry for good. After reforming suddenly when we thought ‘’The Last Sucker’’ would be their last album, Al Jourgensen and Co. released a great album called ‘’Relapse’’, toured extensively for it and the lucky ones (including me also) had the chance to see them live at last. The album that would follow ‘’Relapse’’ would be the last and we waited to see how it would sound like. Unfortunately this album doesn’t feature long time friend of Al’s and guitarist Mike Scaccia, as he passed away due to heart failure. That was a devastating blow for Al, as Mike was his beloved friend and we all knew somehow that the album couldn’t sound as we thought it would without his presence. It’s not that Ministry were based in the personality of one, but also including bassist Paul Raven’s death in 2009, they suffered rather inreplaceable losses.

I would never thought I’d be in the position to support such an opinion, but I’d wish ‘’From Beer To Eternity’’ not to be released. The reason why is that it has nothing to do with the latest Ministry albums, especially the ones released after ‘’Animositisomina’’, which were all full of energy, insane tracks and a feeling that they could obliterate the listener’s ears at once. I understand that George W. Bush is no longer the president of the United States, we cannot deny that he was a large source of inspiration for Jourgensen, that’s why when he was no longer a president, Ministry decided to split up. It feels like this album can’t make you feel this ongoing groove like most of their releases and that’s the worst part of all. Al could surely make this album on his own without the help of partners, as he knows better the sound of his band.

That’s how the album sounds like, it’s like Al playing all the instruments and the result is rather chaotic, as the other members are unable to offer a performance where some of them shines in a way that could make ‘’From Beer To Eternity’’ a great album. Scaccia would surely give a different touch to the album with his skilled and experienced performance, but he’s no longer with us and that’s the tragic reality. Who would thought that a Ministry album would start and not get you by the balls during the first three or four tracks? ‘’Punch In The Face’’, ‘’PermaWar’’ and ‘’Perfect Storm’’ have the structure that could make you bang your head, but on the other had it is sure that they lack something compared to the earlier Ministry era. After all, the only band we could compare Ministry would only be themselves and their past proves to be their biggest enemy.

As the album continues to flow, you get a feeling that some of the tracks should be shorter, some samples would surely be omitted, and there should be a more raging, violent, thrashier, call it how you want anyway approach in order for this album to sound like its great predecessors. Getting at least four 10/10 albums and many 9/10 from Ministry, it is sure that each time the expectations are raising higher, and that’s something this last release is unable to offer, as it escapes the excuse of Scaccia’s death and simply sounds inferior. If I was harsh enough, I could state that it’s also the worst album they’ve ever done, some would say that their first two albums should get this title (‘’With Sympathy’’ and ‘’Twitch’’), but at least these albums were good enough for the style Ministry played back then before the big change in the end of the ‘80s.

To sum up, this latest Ministry release will only be remembered because it’s their last, because it doesn’t include Mike Scaccia and mainly because it won’t stand the test of time and can’t take a place in the back catalogue of the album’s great bands. Al Jourgensen has offered us many great albums in his life so far (including the Revolting Cocks releases) and we cannot blame him for not trying. On the other hand, the only thing I wish him is try and stay alive as much as he can, as I can’t forget his state of imminent collapse last year in Brutal Assault festival. If you want to listen to something that will grab you immediately, Ministry are surely not in the list of such groups for 2013, making their last album one of the biggest disappointements, not only for this year but for the last ten years the least.