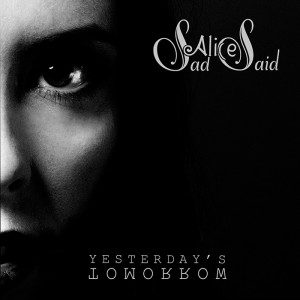 I had started worrying lately, as I hadn’t encountered a release concerning atmospheric metal, but it was Sad Alice Said and their album ‘’Yesterday’s Tomorrow’’ that broke this silence. I was in need of such a listening lately, as I was deep into death, thrash and beatdown listenings and despite I love all these very much, it’s times that the mind must be relaxing from such drumstorms and riffing hurricanes. This band worked for me this specific moment and let’s see what they have to offer to the listeners out there in a time where the releases get numerous and only the strong and capable survive.

This is a very focused album in what the guys want to achieve. I bet they wanted to produce something consistent and they succeeded in it, as the flow of the eight long tracks serve to have the same result and to work as one. ‘’Yesterday’s Tomorrow’’ is a mid-tempo album in all its duration, that goes as slow as it gets to avoid being characterized as a doom album. The guitars are not so heavy and the rhythms aren’t crawling, so despite the melancholy that’s filling the room where you listen the album, you won’t have any suicidal thoughts or feelings of tireness, but it won’t be a shining album to remind you of sunny landscapes as well.

In terms of music, the band does well enough in the production of such atmosphere that it will keep your interest until the end of the album. The wild card is the lady on the vocals, who does what many try and others get their faces smashed because of failure: She is simple enough so she doesn’t get to excessive in her singing, and that’s true salvation for the album. Others might say that her voice can’t reach higher notes, that’s why she chose not to sing in that way, but she mainly focuses in the performance, rather than the possible impressions created for her and the outcome.

I think that she wisely chose this form of singing, as she leaves room for the songs to breathe and the rest of the band play their stuff. Simplified stuff once again, without crazy outbursts or virtuoso solos and double-bass on fire, but mid-tempo to slow structures who put the listener in a trance-like state of ease. Don’t try to find a special meaning behind this album, as you have to be as loose as it gets to enjoy it, noone had a good time putting himself in a sad state while listening to music, and if this has happened sometimes, it’s not that we do it on purpose but it’s albums that produce such negativity from the moment of their creation.

From the eight tracks, I think that ‘’Fade’’ is surely the best and should be the basis to where the band should move in the next releases, it has a special vibe and a little more up-tempo approach that seems to fit the band. Of course, if the guys want to go on in the same slow process, it’s up to them, I think a little more nerve and expression wouldn’t mind, the opposite, it would give them a boost and make them even more interesting. It’s good they chose few songs and a short duration, I think they should do the same again, as the tracks have room to evolve in the listener’s ears. A good effort from Sad Alice Said and a satisfactory for listeners of such sounds. Of course they can do better, but this will show sooner or later.