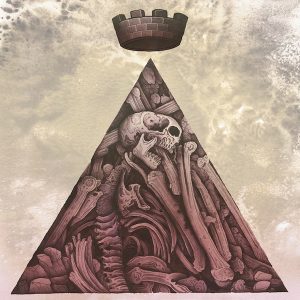 Doomriders is a hell of a band. Coming off from Boston, the group delivers pure bad-ass sludge n roll and doom metal music. Their latest music record, ‘Darkness Come Alive’ became surprisingly popular in the underground scene and the band got popular. This year, the band released ‘Grand Blood’ and I am totally excited about this review. I am curious to hear if the good old recipe of the band to create fast and destructive music can still put the ‘music gears’ into motion.

‘Grand Blood’ is mostly a fast-paced record, with songs that last about aproximately four to five or three minutes. The band wanted to be heavy but rocking and they have achieved that. Most songs are groovy but there are also plenty doom elements. The band is energetic and reminds me of Clutch or Motorhead, only in sludge sound and heavier. As a result their songs are fresh, full of emotions and energy, something that is missing from today’s music in overall.

The record includes a handful of guitar riffs and harsh, deep vocals. The sound of the record is modern, but old-school in the same time. It is as heavy and dynamic as it can get. Besides the fast songs, there are many moments where the band gets groovier and more sludge, relaxing to ‘run’ again. With a small intro, the record begins with ‘New Pyramids’, a track full of magisterial drums and dominating guitars. In songs like ‘Mankind’ or ‘Grand Blood’ the listener can surely take a full dose of how groovy the band wanted to be, with great guitar introductions and elements that remind me of Mastodon or Clutch.

The rock moments of the album are easily noticeable. For example, ‘Bad Vibes’ or ‘Gone to Hell’ offer a rock version of Doomriders, something lighter than we got used to, without that to be a negative point. It is very clever to mix up things a bit, mix up music genres and influences. On the other hand, ‘Death in Heat’ for example is totally doom metal or sludge metal. It is slow and anguished. However the record isn’t a perfect one. I found out songs that I didn’t like in the end, like ‘Dead Friends’ for example, but I must admit that the majority of the music is completely mind-blowing and satisfactory.

In general, ‘Grand Blood’ is another positive step in Doomriders’ career. The tracks are well achieved and the band is always in a crunchy and joyful mood. I guess the new record would sound splendid on stage, tearing the whole night apart.