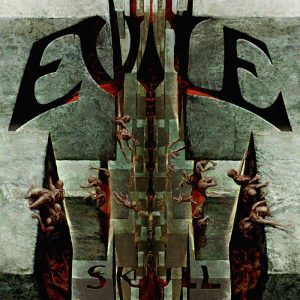 Here we are again straight from the heart of the New Wave Of Thrash metal as last time with Gama Bomb. The new album of the British Evile is on the loose after the more Slayeresque debut album “Enter The Grave” (2007), the more technical yet even better “Infected Nations” (2009) and the even catchier “Five Serpent’s Teeth” (2011) showing the band’s mood to move forward even after the great loss of bass player Mike Alexander in 2009 due to a bus accident. Evile used to be a Metallica cover band called Metal Militia, hence the influence on Matt Drake‘s voice.

New album “Skull” starts ripping with “Underworld“, a fast and ripping track made to begin any live show including a fast and addictive chorus and as always top notch solos. The writer had a smile on his face from the very beginning. The title track follows as “skull awaits your soul!” Thrashing the listeners’ ears just to reach the point of a mid-tempo highly addictive chorus showing the progress Matt has made with his voice combining Tom Araya (Slayer), James Hetfield (Metallica) and even Chuck Billy (Testament) including some headbanging slow riffage in the middle. “The Naked Sun” starts off thrashing through the verse and another highly memorable chorus then breaking into mid tempo and back into the speed including an acoustic outro.

That leads us to one of the most headbanging tracks of the album “Head Of The Demon” with an amazing riff leading the charge over to an acoustic break then to a kick ass guitar solo and off to a final chorus over tapping lead guitar as an outro. Things slow down a bit with “Tomb” with Metallica influence all over the place as well as the mighty Testament (remember the amazing ballad called “Trail Of Tears”?) showing the bands mature face as was first shown on the track “In Memoriam” on the previous album ending hammering slowly. The headbanging session continues with a track showing the rhythm influence of Metallica/Exodus including a violent fast riff reminiscent of Slayer or Sepultura and a fast solo over it then back to headbanging madness.

“Outsider” is like “Thrasher no 2” for most people. Not quite so, as it has an arpeggiated break in the middle between the sheer Thrashing mayhem that would make Exodus and Slayer proud of their legacy. “What You Become” is another dark and groovy track showing some Megadeth (“Countdown To Extinction” era) and Pantera (riffwise) influence including some great soloing as always. The album ends with “New Truth, Old Lies” starting off with an dark acoustic intro somewhat reminiscent of Slayer (“Seasons In The Abyss” era) going into a headbanging mid tempo riff going through the chorus before going into an Exodus-esque riffage in the middle that’ll surely create chaos in the pit followed by a top notch solo, some Testament-esque riffage then back to the beginning riff and a fading out mid-tempo riff to end the record. One of their fullest songs to date. Evile released their most mature album ever and one of the contenders for the best albums of 2013! A big hail to Evile and we’re counting days till we see them with Suicidal Angels and Chronosphere @ Kyttaro Club.