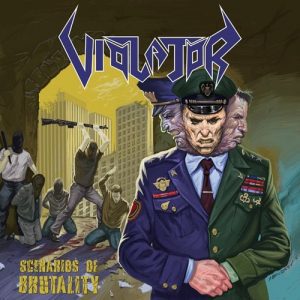 Hailing (or to be more precise Thrashing) from Brazil, the land that gave us legends like Sepultura, Sarcofago, Krisiun, Attomica, etc, we have the world renounced Thrash metal heroes Violator! The band that surprised me with one of the most immense take-no-prisoners New Wave Of Thrash metal debut albums ever called “Chemical Assault” (2006) that made the world turn their heads and think that these maniacs are up for some serious business. “Annihilation Process” EP followed in 2010 and was equally as good and even more focused lyricwise on topics of political and religious oppression within their society. Their sound has the edge of Exodus and Destruction with the classic hint of Sepultura here and there.

3 years later we have their full length comeback “Scenarios Of Brutality” showing the Sepultura influence production-wise and a bit more musicwise than usual. Their new album kicks in with a sample from “Malcolm X” saying “The price of freedom is death” and in comes “Echoes Of Silence” ripping fast with an amazing chorus and doesn’t let go even at its groovy riff after chorus showing the band’s killer mood. Lyrics are very interesting since they deal with the Indians near the borders of Brazil with Paraguay who were merely enslaved by corporations and some of them commited suicide not being able to handle this situation, a crime that was covered up for five centuries.

“Endless Tyrannies” coming up next addressing the issue of the conservative elite of Brazil for the greatest part of the 21st Century who never faced a proper trial and continue to exert broad influence on the political life of South Americans. Musicwise, we have another ripping Thrasher with a chorus reeking of anger going midtempo around the middle followed by kick ass soloing. The violent Thrashing mood continues with “Dead To This World” despite it’s groovy parts giving the song some room to breathe. A song dealing with men working for large companies turned into slaves of zero life value. Another “Malcolm X” sample leads us to “Respect Existence Or Expect Resistance” (the title pretty much speaks for itself about families fighting for their homes in Brazil) another fast track including a breaking mid tempo solo that would make Andreas Kisser of Sepultura smile with pride.

“Waiting To Exhale” starts off with groovy riffage only to turn into another Thrash tornado devastating everything in its path including great soloing and an amazing riff reminiscent of “World In A World” by Vio-Lence ending with a groovy riff fading out. “Death Descends (Upon This World)” is another violent instrumental Thrasher that clearly shows their ability of throwing riff after riff in our faces! “Colors Of Hate” brings back the political lyrics this time around dealing with racism, as well as keeping up the level of aggression including a great mid tempo break. “No Place For The Cross” comes up next to be one of those songs built to destroy at live shows (the question is though which song of these on this record isn’t built to do so?).

A Kreator-esque intro leads us to “Unstoppable Slaughter” which balances between mid tempo mosh riffs and ripping fast riffs. Lyrics talking about a massacre of workers by the Military Police of Para that took place in April 1996 due to their uprising to claim the land that belonged to them. What a way to end a fantastic record! Violator released a modern day masterpiece showing that they deserve the recognition they get. Oh time for me to stop talking and start MOSHING!