Royal Hunt
A Life To Die For 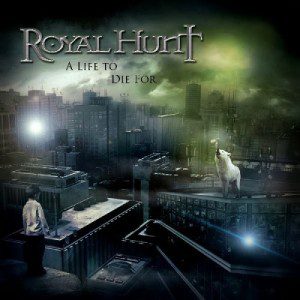 I’ll start by stating that I’ve made a major mistake for not waiting the whole year to end before I give my final top-20 list to the chief editors. This album shows me that it’s the last time I did it and from now on, I’ll be giving my list the first day of each new year, when I’ll have listened all the albums of the current year. ‘’A Life To Die For’’ is a new amazing album from Royal Hunt, the successor to the also amazing ‘’Show Me How To Live’’ and surely a surprise I didn’t expect, as the previous album was the best the band had done since ‘’Fear’’ and it seems like the new arrival of the charismatic D.C. Cooper has given a new boost to the main composer Andre’ Andersen, as he seems full of new great ideas that become majestically unique.

First of all, I see a connection to the title of the album with the previous one, it seems like these two albums work as one, I can’t explain otherwise the freshness and the variety of great ideas we encounter from the beginning to the end of the album (last time this happened was with ‘’Paradox’’ and ‘’Fear’’, somewhere fourteen years ago that is). The album opens with its longest track, the almost ten minute opus called ‘’Hell Comes Down From Heaven’’, where the whole talent of this new Royal Hunt line-up gets revealed without any hesitation. Cooper’s voice is in unbelieavable shape, and if you don’t believe me, those of you who were in the band’s show on April of 2012 in Athens or the latest show of Shadow Gallery in October, where he was a guest, then you have the proof required without needing me to tell you about it.

The real surprise comes with an amazing duo of tracks that could even replace ‘’Half Past Loneliness’’ from the previous album in your hearts. I’m talking about ‘’Running Out Of Tears’’ and the album’s best track ‘’One Minute Left To Live’’ (it seems like the issue of life and death concerns the band members a lot the latest years and they put it often in the song titles). Typical addictive Royal Hunt anthems with the keyboards of Andersen having the main role and everyone else follows the structure made by the leader. D.C. is the rock star that knows he’s a rock star but on the other hand, he wouldn’t do what he does so good if he didn’t know it, that means he’s got to keep himself in high level of performance (not that he needed much effort for this anyway, but a star must be a star in all occasions).

The band’s mood must have been very positive during the recordings, as it shows as a feeling on the album’s listening. Like some loves that never die, such is the chemistry between Andersen and Cooper that boosts this material so high that even people who thought that Royal Hunt have nothing more to give, will reconsider once they listen to this album (and the previous one of course, let us not forget about it). ‘’Sign Of Yesterday’’ is another hidden weapon to convince the ones mentioned above and to make each of you that may not be familiar with the band so far, start falling in love with them at first listening (it won’t be any hard, believe me). The orchestrations are beyond criticism and the production helps every instrument to sound as loud and clean as it has to. It is surely an album carefully built to the last detail.

It is so great that it seems a little miracle that they did two such good albums in a row in two years’ time. Someone who is a fan of the band since the old days may add ‘’they did it again in the mid ‘90s with even better albums’’ and he will be 100% right, but times have changed more than a lot since then and we’re not talking about the same band. What we’re talking about is a second birth and an album that continues the same rising course for the band as ‘’Show Me How To Live’’ did. I don’t know if they can release a third great album in a row, but I won’t be surprise if we have another masterpiece like ‘’Paradox’’ or ‘’Fear’’ the way they treat their music recently. Thumbs up for Andre’s inspiration, Cooper’s performance and the whole band’s effort for this release.