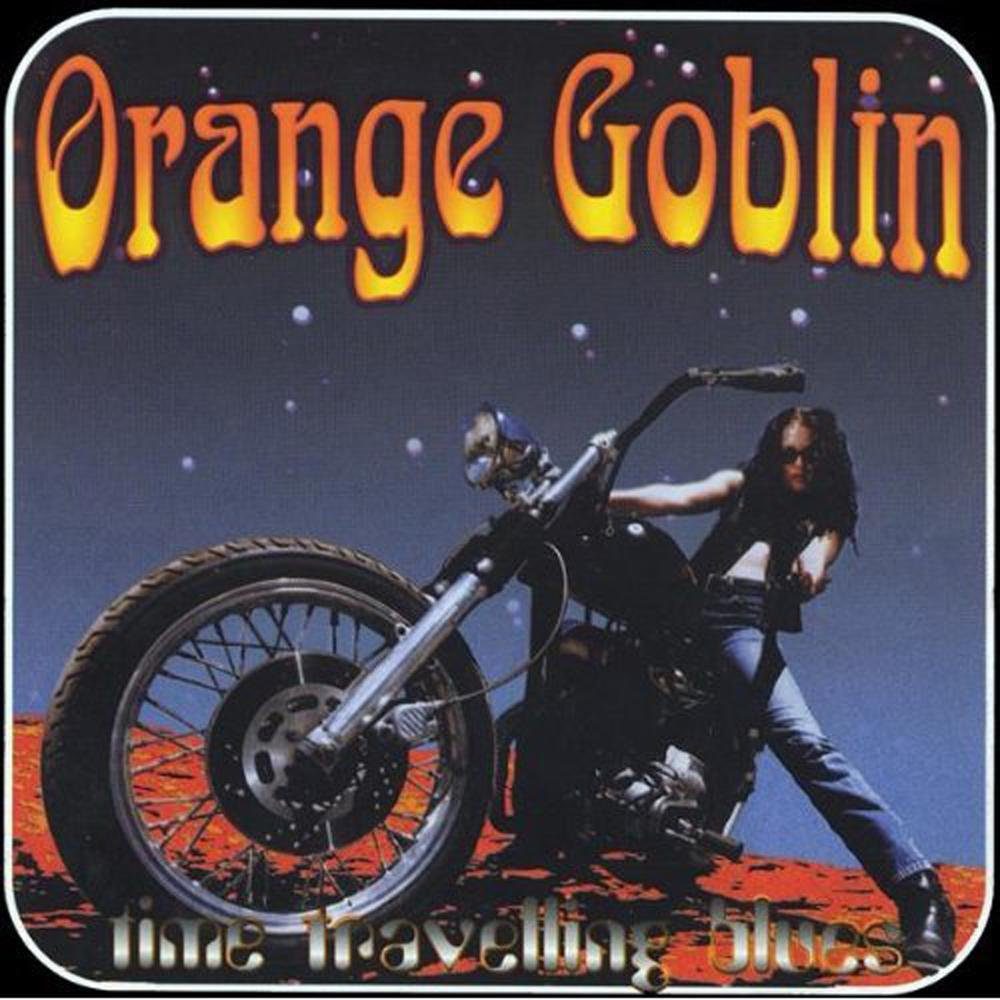 Travelling 13 years back! 1998 an English band born in 1995 under the name of “Our Haunted Kingdom” now called Orange Goblin release their second album “Time Travelling Blues”. For this trip Joe Horri and Pete O’Malley on the guitars, Martyn Millard on the bass, Chris Turner on the drums and Ben Ward on vocals and beers. At this period, this combo evolves in a stoner/doom style giving 9 tracks heavier than ever!

The first track in line “Blue Snow” comes slowly in with a progressive introduction of instruments. Motorcycle engine, drums, bass and guitar noise, the machine is ready and Ben Ward kicks in. A voice reminding the pioneers of Doom, rusty and strong. Everything is perfectly combined. Powerful riffs, smooth guitar solo, a play of drums adjusting the whole thing. Only the bass is kind of shadowed but only for this one.

Second one is the amazing “Solarisphere”. Things start to become really heavy! Guitar riffs filled with rough doom sound like a punch in the face with a chilled groovy pause in the middle of the track like a scotch bath! The first track was just the beginning. With the second one they just prove that we have a lot to take from them yet. A combination of Stoner and Classic Rock.

With the third one, smoke from the 70’s comes in the air with a Hammond organ introduction. Shine has everything: psychedelic Sabbath’s sound ,space travelling vocals and tremendous bass lines. And soon guitars kick back in, fast and strong, replacing you back on the Orange Goblin trajectory.

As The Man Who Invented Time continues in the same pattern, Diesel (Phunt) bring a rock n’ roll attitude, filled with biker style, fast as lightning, riffs! The Orange Goblin engine burns diesel like hell. Snail Hook and Nuclear Guru retake the Sabbath attitude, the first one with all the heavy/doom punch and the second one with the blues/rock n roll combo. Ben Ward offers a rougher Ozzy voice and Martyn Millard with Chris Turner release a massive rythm section.

Lunarville 7, Airlock 3 keeps the rock n roll heavy sound and at last comes Time Travelling Blues, a kind of surprising change to the what we have experienced until this one. More southern American spirit, this track filled with booze is the perfect ending and farewell for this album. Millard dress up the whole with amazing bass fill ups. We owe the sun, we owe the sky…….

One of their best Orange Goblin release in my opinion, this album is a bucket full of golden riffs, colorful rhythms and rusty vocals, all dropped in a barrel of whiskey and psychedelics. Truly not only an Orange Goblin monument but a whole stoner scene one and a great influence for many bands of the genre.