Spotlight: A Tribute To DEAD CONGREGATION

The first thing that pops-up when you think death metal is brutal vocals, 100.000 tons of guitar riffs, insane drumming and ultra insane blood and sweat mosh-pits! Well that’s exactly what DEAD CONGREGATION have been offering to their concert attendees since 2004.

DEAD CONGREGATION, come from Athens, Greece and their main purpose of existence is their death metal world extermination! Climbing up the walls of a genre that has so many bands, DEAD CONGREGATION really stood out from the pack with their severe sound and their will to be one of the best in what they’re doing, globally! Having released two full length albums and two EPs, so far, we are going get a small taste from each one of those releases in the following lines and of course their videos.

We’ll get started with song “Lucid Dreaming” coming straight from their first EP “Purifying Consecrated Ground” (May 1st, 2005). Here we can clearly hear their influences, such as Immolation and Morbid angel but also their unique approach in their own sound! PLAY IT LOUD!

Coming up next, in their release timeline, is their first LP entitled “Graves of the Archangels” (January 30th, 2008) that really made its presence quite like an atom bomb in the global death metal status. With their sound being even more personal and giving them their own identity, Dead Congregation with this sick release started their journey to the top of the death metal mountain! Check out the song “Source of Fire” below and be sure to check the rest of the album for sure!

Their second LP entitled “Promulgation of the Fall” (May 5th,2014), really placed them among the great bands of global status and purified all doubts concerning their carrier! Death metal, with old school influences and great sound! One can’t resist to head-bang or push somebody, to the sounds of the song “Immaculate Poison” that follows! An incredible release in its entirety! A genre top the least!

To sum it all up DEAD CONGREGATION will be performing on Saturday 25th of March 2017 in Thessaloniki, Greece together with support acts SACRAL RAGE and THE TEMPLE, thanks to the organizing team of Krisis Productions, and that’s really the perfect way to see, listen and feel how great all three bands are on stage! URGH! 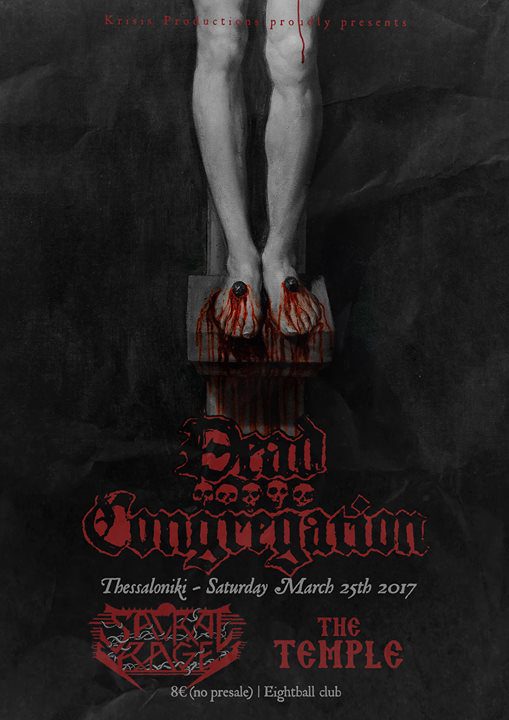