Drummer Tim Yeung: New Morbid Angel CD May Be One Of Band’s Most Well-Rounded Albums Ever 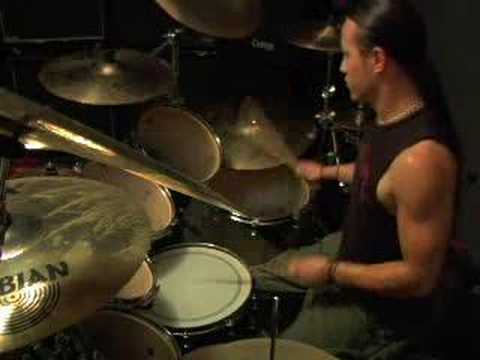 Florida-based death metal veterans MORBID ANGEL entered Mana Recording Studios in St. Petersburg, Florida on June 22 with engineer Erik Rutan (former MORBID ANGEL guitarist and producer for such bands as CANNIBAL CORPSE, MISERY INDEX and GOATWHORE) to begin recording their ninth full-length album. Due late 2010/early 2011 via Season Of Mist, the new CD will be the band’s first to be recorded without longtime drummer Pedro “Pete” Sandoval, who recently underwent back surgery for a deteriorating disc problem. Filling in for him on a temporary basis is Tim Yeung, who has previously played with DIVINE HERESY, ALL THAT REMAINS, NILE, HATE ETERNAL and VITAL REMAINS).

Commented Yeung: “I must say that it is been a huge honor to be playing for one of my favorite bands that I grew up listening to as well as filling in for one of my biggest metal drumming inspirations.

“I’m currently in Tampa, Florida finishing up the new album with David [Vincent, bass/vocals] and Trey [Azagthoth, guitar] and it’s going great! Overall, I think it may be one of their most well-rounded albums ever. There are killer experimental electronic parts as well as some really cool groove parts. Don’t worry — there is plenty of blast beats and blazing double bass as well!

“I’ve also been working on a ddrum signature snare which will be out early next year. It’s a 14×6.5, steel shell, flanged hoops, USA tube lugs etc. This drum is absolutely perfect. I’ve been beating on the prototype and I’m in love with it! I also have been working with 3rd Degree merch on a Tim Yeung package which includes a T-shirt, my personal sticks and an autographed poster. There is a limited supply so don’t wait around!”

Professionally filmed video footage of MORBID ANGEL’s entire June 27, 2009 performance at the Rock al Parque festival at Parque Simon Bolivar in Bogota, Colombia can be viewed at this location. A clip of the new song “Nevermore” is available below. (Note: The footage originally aired on Colombia’s Canal Capital.)

“We played the new song ‘Nevemore’ on the last tour and that kind of shows where our heads are at,” he said. “I’d say it’s like an assemblage of all sorts of stuff from the catalog and some new influences. I listen to a lot of hardcore [techno] music now — the fuckin’ serious, artistic stuff, not that crap you hear at the clubs. That stuff has impact and it’s really extreme. Even if there’s no guitar in it or no real drums, the energy coming out of the speakers is amazing.” He added, “All I can say is, when it’s ready, it’s going to be extreme and outside the box. And, hopefully, the songs will inspire people to look deeper inside themselves for ‘the stuff’ and to tap that potential that we as human beings have.”

Although MORBID ANGEL has yet to announce a title for the new CD, its name will likely begin with the letter “I”, in keeping with the band’s tradition of titling their albums in alphabetical order beginning with 1989’s “Altars of Madness”, and continuing through “Heretic”.

Regarding Destructhor’s addition to the band’s touring lineup, Vincent said, “We had a fairly long audition process. We looked long and hard at this. We decided when we began this process that it was gonna be a unanimous decision. We had several people [apply for the job] — very good players from, really, all over the world — and we got a video from Thor — the same video that we asked from all the different players; the same two songs — and some people didn’t get past the initial discussion stage, and then some people went on to the next stage and it ended up that the band unanimously felt that Thor would be the best guitarist for the band.”