Secret Illusion – Point Of No Return 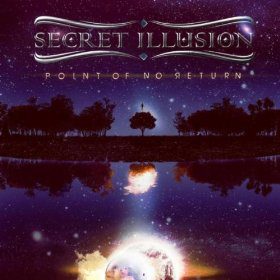 What we have here is the latest EP of the Athenians Secret Illusion, following their first full-length called ”Illusions” back in 2011. Their style is much of my liking as they remind me of the glorious days of my beloved Stratovarius and I think they are a very suitable act to play as a support band to the Finnish legends. What is one of the best things here in this album is the very good production and the clean sound.

”Point Of No Return” is a euro-power anthem brought back from the mid to late ’90s when the whole genre was springing and each band dealing with it would release something really nominal (not to mention the countless gigs here in Greece that would become sold out months ago). The vocalist without pushing himself, manages to deliver a great voice fitting very much with the material. The guitars are heavy (as they must) and the rhythm section follows the riffs constantly.

”Turn Back Time” has a beginning which brought the heavy period of Angra in my mind, another very good track like one of those which you know they will sound better live, as its structure is promising to make it a live hymn. The guys are in the right direction in delivering a second full length possibly soon which will become even better (and more important for them) compared to their promising debut. The release closes with a piano version of ”Silent Voices”, making it the emotional moment where the band shows another great side to us all.

Secret Illusion dare to play a forgotten sound to the once power metal frenzied Greece and they manage to do it with success. I don’t know if they will become one of the leading bands in the revival of this sound (which has lost its freshness way too many years now) but I surely know that these guys are worth your attention because they work hard and they play something they love. Time will prove if they are only a lighting spark or a fire on its birth. Follow their sound and you won’t lose, especially those of you who want to remember good old days of the past.