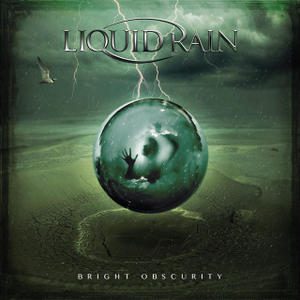 Lately I discovered a great album released at the end of 2012 by a band in its first steps that made my head turn. I’m talking about “Liquid Rain”, a progressive metal band formed back in 2009 in Berne, Switzerland. “Bright Obscurity” is their debut album that includes eight songs of pure prog metal that reminds a lot of prog metal gods like “Dream Theater” and “Symphony X”.

Even though the final result sounds quite professional, these guys are all young and seems like a bright future lies in front of them. I have to say that I was quite impressed when I heard this album for the first time. Really great stuff going on in these almost 64 minutes of playing and these guys seem to know what they’re doing and the high quality songs that they deliver could be included in the album of a big prog band.

In songs like the first one “The Crooked Path Of Life” you can hear the resemblance with “Symphony X” and the way they change between rhythms reminds me a lot of Dream Theater’s writing procedure. The focus on the modern sound of prog metal like “DGM”, “Haken” or even “Redemption” but also have been influenced by classic metal bands like and “Fates Warning”.

“The Ordeal” reminded me of a “Circus Maximus” track and at some points “Pain Of Salvation” but nevertheless its great song. The similarities with big bands are obviously a lot but the band manages to retain the personal sound and show their creativity and musical knowledge in songs like “Fast Food” an instrumental song with some oriental flavored melodies and a Spanish flamenco-style guitar solo in the end.

There is “Homeless” that is kind of a hit-song sounding straight-forward and really catchy or “So Far Away” that is a power ballad with a fantastic guitar solo, where “Janine Hulliger” (Fragment Of Symmetry) which is probably the drummer’s sister participates with her wonderful voice. The band has also found a way of combining traditional instruments without sounding cheesy. Don’t know why but the piano in the beginning of the instrumental track “Colored Darkness” reminds me lot of “Savatage” where the band shows the musical level once more. Liquid Rain are all fantastic musicians and I have to say that I was blown away by “Cyril Stoller” that responsible for the amazing keyboard melodies and “Dario Colombo” with his crunchy guitar sound, cleverly-played heavy riffs and awesome solos. “Norbert Suppiger” has an amazing voice though he imitates “Russell Allen” a lot.

Two last songs are the biggest of the album with a lot of tempo changing and melodies. “Rising From Seclusion” almost reaching ten minutes and “System Of Illusions” that is a thirteen minutes opus where Janine Hulliger also participates. The home-made production and the mixing “Simon Beck” did create a pleasant sounding final result. To sum it up “Liquid Rain” has promising potential for the future and “Bright Obscurity” is definitely an album for all the prog fans that constantly search for new bands out there. Give them a try.