Malediction – Impaled Of The Slammering 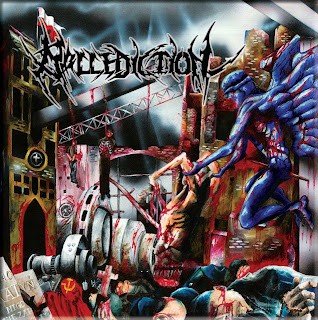 After their forming in 2010 and the release of the ”Warsaw” EP, time brought Mallediction the chance to record and release their first full-length entitled ”Impaled Of The Slammering”. It seems they were more than prepared for this next step, something which shows first of all in the album’s amazing production. Brutal death metal is about being vast, heavy and pounding and Mallediction surely succeeded in getting to the point of all these. Despite the great sound created at Incorporated Studios, there are also great ideas that lead the eight compositions to a higher level compared to the middle brutal death metal basis, in and outside Greece.

After the small intro, ”Addicted To Sin” manages to welcome the listener in 34 minutes of constant pounding of the skull, faster beating of the heart, hardening of the arteries and immense blood pressure. It is not a doctrinal gathering but a staggering violent and punishing process until the ending of the album with the title track ”Impaled Of The Slammering”. The first thing someone notices directly is the tremendous guitar work and sound. Blade-like riffs cut through the veins and create fatal wounds in and out of the body. The only way to be able enduring the massacre, is open ears and will to get obsessed by the quintet’s focused assault towards you.

The guitars lead the way in most parts of the compositions, vast, cutting like razors and always ultra heavy, they sometimes follow the drummer’s crazy and bizarre rhythms but they always show who’s the boss in this album. The rhythm section adds much points to the overall result, who doesn’t want his extreme death metal with bass groove and insane drums after all? Last but not least, comes the voice of John ”Sothis” which fit perfect with the onslaught on the background. Thick-skinned but very expressive, they give the tone for the guitars to weave much more riffs than the middle ear can take/cope with and once all these are adjusted right, the result becomes even better.

”Plan Of The Ancients” is my favourite track on the album, with the great rhythm guitar repeated riff which leads to a very fast break that takes the track to the first place on this release. Of course, the other tracks don’t lack quality, with the second half of the album being a little more interesting to me, due to some hidden great rhythms which the ear may not catch from the first listening. Such examples are ”Manifestation” and ”Transmutation Of The False”. It is a very big hint for an album to open and close in a good way because many times, the ear focuses on the first and last impression, Mallediction aimed a bull’s eye in that case for sure.

The first attempt of the band from Athens can’t help but being criticized positively. Many bands try to play like this, death metal survived the decline of the whole genre somewhere in 1992-1995 and became a very flexible kind of music which brought up many new subgenres on it. The guys did all things great and they can be proud of this effort. Especially for their production which raised their material many clicks higher. With such professional treatment on their music, they will surely release even better stuff in the future.