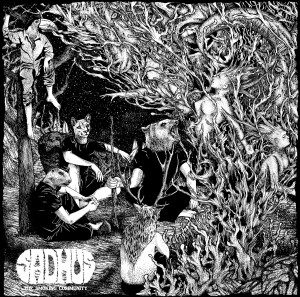 “In the year 1980, a green massive comet falls down to earth. Inside it a huge hairball, rotten, begins to inhale music, just perfect to its ears. Three mushrooms forced it in the psychedelic form of music and a Baba helped it in his gnosis. All five after a lot of intergalactic wanderings, decided to stay in earth as the embodiment of five earthly figures, keeping their genuine un-earthly music alive.”

This is how Sadhus themselves describe their band and their sound. I’ve got to say, they are spot on. If you are looking for a pure sludge album that has the smell of sweat, mud, blood and suspicious satanic herbs, then you really need to own this album. Sadhus (speaking in terms of discography) have been around since that amazing Spinaloga records compilation “Miss Fortune was a Henhouse Manager” and up until now they have been lurking in the shadows with occasional live appearances as support on Suma, Toner Low, Sardonis, Black Tusk etc. giving out loud warnings about what we were going to experience in this album.

Sadhus The Smoking Community is a real treat for the old school sludge fan. In here you will find all the things you have loved about Crowbar and Eyehategod, yet with the misanthropic attitude a little toned down, let’s say such as in Dopethrone (the band, not the album) and not like the slow dragging hate fest of Grief. Their beginnings were more on the stoner side (listen to the amazing “Foondamentalist” from the aforementioned compilation) and that groovy element has infiltrated the filthy sound of “The Smoking Community” as you can hear for yourselves in tracks like “Stevaro” and “Bampoola”. The thing that is definitely not stoner and oh-so-ultra-fucking – sludge is Stavros’ rotten and ear piercing (in the good way) voice. Screams, growls or shrills, you name it; this guy will deliver in the most brutally sickening way. A possessed beast, I had the chance to see him live once doing guest vocals for Last Rizla during their support on Ufommammut and I was thiking there is no way he doesn’t spit out blood after each show. One of the “dirtiest” vocalists you can find out there, going hand in hand with Vincent Houde.

Also, in contrast with the sludge monoliths “Burned by hand” and “The Smoking Community”, Sadhus are not reluctant on speeding things up a bit! “Colombian boat blues” and “Make me 20 euros” (weirdly enough my personal favorite) ride on through the swamp and bring in mind the flourishing crust scene of Greece. All in all the roughly 40 minutes “The Smoking Community” has to offer are deemed worth the wait. The songs match perfectly with the mindfucking album cover. I believe that if I was lost inside an ominous forest ruled by some kind of tree deities, surrounded by people with animal heads and possibly under the influence of some despicable hallucinatory drug, “The Smoking Community” would be my choice of a soundtrack. On a footnote, I was expecting something more than “very good”, something that would blow my mind off my skull, however, if you are taking my words too seriously, remember also that I am not such an avid fan of sludge metal. In case YOU are, then this album will speak to you in a really different way.

PS (1): If you are a Greek reading this, make sure you don’t miss their release party on 19/9/2014 at AN Club, together with fellow underground magicians Korsikov and Gomgoma and my beloved compatriots Monk (trippy stoner/sludge jamming, awesome live experience).

PS (2): For the English speaking readers that try to decipher what the hell some of the song names mean, you need to know that Sadhus have played the fun trick of taking Greek phrases and words and either write them in English letters or just translate them as they are, thus having absolutely no meaning for the English speaking person. So let’s go, Greek 101 from Metalpaths for you! 1) Burned by hand = you are in a dead end situation and you didn’t have a chance to achieve something from the start anyway 2) Stevaro = Super macho, super strong 3) Bampoola = Boogeyman. So there you have it, groovy sludge and Greek lessons, what more do you need?