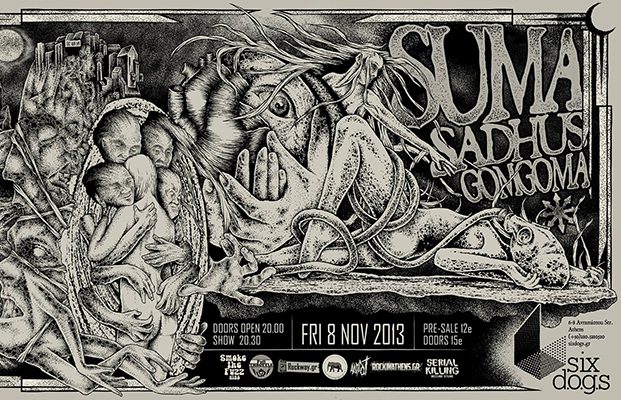 It’s been a long time since I last attended a sludge gig in Greece. The exact music genre does not number a large number of fans here as it does in the north Europe or in the US. However, here we are, on 8th of November, and ‘Smoke the Fuzz’ organizes one of the most anticipated concerts of the year, with headliners the sludge legends from Sweden, Suma! Along with them, two Greek sludge bands support the show. The names are Sadhus and Gomgoma. A little research of their music will reveal why they were chosen and the talent which unfolds through them.

I arrived at Six D.O.G.S just in time! With a quite impressive number of fans the show takes off and the first band which opens the show is Gomgoma. The band delivers some hardcore sludge music, with aggressive, breath-taking vocals and slow, dynamic guitar riffs. They do not include a bass player, only two guitars, drums and vocals. In fact, who needs a bass player when the guitars are as heavy as it is needed to complete the rhythm section themselves?

I’ve never seen Gomgoma in a gig before and I must say they are absolutely impressive! The band’s sound was excellent even if the vocalist claims he could hear the second guitar loud and clear. From where I was standing, I could hear every detail of their sound. With groovy guitars and a vocalist on fire, the band performed much more than their officially released songs. Miltos was most of the times down with the crowd, headbanging and providing those extreme and submissive and ground-shaking vocals. The gig starts in a perfect way. I’m looking forward to hear some more from Gomgoma and of course another release from them.

After Gomgoma, Sadhus are the next to walk on stage. I’ve known Sadhus from a compilation by Spinalonga Records and their songs ‘Foondamentalist’ and ‘Murderer’. The band is known for their slow, doom music along with high-pitched screaming vocals. In their sound, in their music they contain something cult, something spiritual. Sadhus have a large future in front of them.

On stage, the band was alive, explosive and very creative. A movie was projected on the background. However some technical issues did not allowed this and crashed the movie after the first minutes. It was really a pity, because I love to hear sludge metal live along with horror movies. Sadhus didn’t care and continued delivering the music of the devil. Their vocalist is really unique and their songs sound even better on stage. The sound was loud and clear again, the guitar was trembling from all those heavy doom riffs and a mystical vibe has spread.

When Sadhus ended their set, I was too exhausted from the heavy headbanging already. Suma, the headline act was about to begin and I was looking forward to see what the band will achieve in this concert. When the Swedish started their set, the crowd was numb in the beginning. By the time the music has started, and the drummer of the band, Erik, banged his drums set in groovy rhythms everyone in the room started to headbang along with the music.

What can I describe about Suma’s performance? The only fault I did noticed was the low volume on vocals. I needed them to be a bit louder. Besides that, the band was awesome. Their atmospheric sludge metal is ideal for letting your mind travel far away from your body. ‘Let the Churches Burn’, ‘Hypno Assasin’, ‘Dominator’, all the classic songs were here, in front of me. Erik is a hell of a drummer. His hands were banging the drum set with deference, just like hitting a holy grail. Johan and Peter were great too and along with Rick (the guy arranging the samples for the music), they sounded so completed, so dominating.

What a concert! The show was absolutely perfect and along with the bands, ‘Smoke the Fuzz’ should be thanked for the ideal arrangement of the show, as well as the party afterwards. Let’s hope we will attend more sludge concerts as well organized as this one! Well done to everyone.