A new star has emerged the last 2-3 years from the heart of Larisa. Gus Drax, known for his presence in the insane band Biomechanical and recently joining German thrashers Paradox, delivers his first solo instrumental album. Read below the reasons why we all have to count on him for the future, about his new plans and some of his statements about various things in metal generally.

First of all we’d like to introduce yourself to the readers of Metalpaths and tell us some things about you, how and when you started playing, your main influences and some of your favourite artists.

First of all thank you very much for having me here. Greetings to all the Metalpaths readers out there! Gus Drax here. I was born and raised in Larissa Greece. I started playing guitar at 14 years old when I first saw Dream Theater’s “Live in Tokyo”. I was blown away by John Petrucci’s performance and I decided that I wanted to play guitar. In 2007 I joined the UK Progmetalers Biomechanical and since then I’m the guitarist of them. I also play in the German Thrash metal band Paradox and in the greek melodic metal band Black Fate. I also recently formed my band we are currently working on our debut album. I admire and get influenced by many musicians. My biggest influence is John Petrucci. Some other guitarists that I admire are Michael Romeo, Jeff Loomis, Chris Broderick, Jason Becker, Marty Friedman, Richie Kotzen, Criss Oliva and many others! 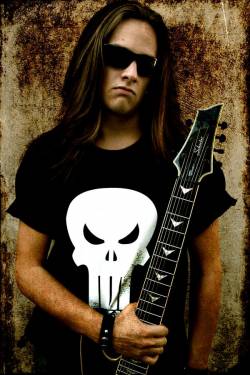 Your first release is reality. In my opinion it’s a great solid album with a great production and you deserve everybody’s congratulations. Could we have some details about its recording? Meaning how much time it took, who produced it and which ones helped you finish the album.

Thank you very much for your words man. I started working on this album when I was 18 years old. But only a few months later John K asked me to join Biomechanical and I stopped working until the end of 2008. Then I started working again on it and took me 8 months to write and record everything. The guitars and drums were recorded at Jon Simvonis studio in Athens. Jon also mixed and mastered the album. The bass was recorded at Warcry studios in Larissa by Vasilis Liakos and the keyboards were recorded by Bob Katsionis at his home studio in Athens. I had also the honour to have Steve Smyth as a guest in it. He played a solo in the track “Hourglass”.

It’s very seldom the feeling that something new is coming to refresh the whole scene. How do you feel when people say this to you? Does it bring you some kind of weight and responsibility for the future?

Music always evolves in one way or another. About my responsibility, I understand that people have expectations from me and other young musicians for the future of this music. Honestly? I have this in mind and I want to exceed all the expectations but I don’t let this change the reason that I started playing music. I play music because I love it, I express my feelings through music. Now if that means something good for the music’s future I would be very happy that would be an honour. But my main goal is the same with the goal I had the first day: To write my music and express my feelings through it and write something that people is going to like.

Though it might be early, have you thought of doing some gigs to promote this album? It might not be the easiest part to play a full instrumental show.

Yes, I have think of that. It would be awesome to do it. There are some plans but not announceable yet. It’s also not possible to make extended touring for it cause I have the writing of the next album with my band as my first priority.

As far as I know, you have something new on the way, totally different than what you just did. We’d like some details, as much as you can give. Also, are there any plans for a second full length like ”In Search Of Perfection”?

Yes, like I said before I formed a band and we are currently working on our debut album. The main difference is of course that it’s not going to be instrumental. The style is very close to “In Search of Perfection” but it got a little bit heavier this time. About another instrumental album, I have in mind to write another one but this is not going to happen very soon to be honest. I’m going to give my full attention in my new band and of course all the other bands that I play. I keep this window open for the future though. If I have some free time maybe I’ll write another one. There are also plans for the next Black Fate album which is going to be the first album that i’m going to record with them.

We all got to know you better from your presence in Biomechanical, alongside John K. We’d like to know the story behind this, because many fans still wonder how he found you. 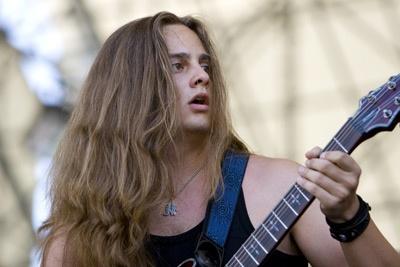 Yeah it’s a cool story actually. He first saw me on myspace. He watched some of my videos and listened to some of my demos and he asked me to join the band and I accepted right away of course.

Also, you became a member of the German thrash pioneers Paradox this year. Tell us some things about this and how they got in touch with you.

I read on the internet that they seek for a guitarist and i thought “Why not?” and I sent an e-mail with some of my videos and info about me. We talked a little bit and i became the new guitarist of the band.

Not only you don’t seem to be afraid of heavy schedule, but despite being in two bands, you just made your personal album and there’s more to come. What is it that keeps you so active? Love for music? Some special kind of energy? Ignorance of danger? Or is it something else?

I would say my love for music. I don’t think that there’s anything dangerous about music that I ignore. I just love to play music, that’s what I know to do best and I do it! The fact that I am in 4 bands including the band that I recently formed has nothing to do with it. I like many styles of music and with each band I am able to play a different style. If the opportunity appeared and my schedule allowed it I would play in another band that played another style.

We’d like your opinion for the Greek scene in general. Is there any group or any guitarist that you think they could do something special? What should change in order things could be better for Greek musicians?

This is a huge conversation probably without an end man. Greece never lacked of talent. We always had telented musicians and good bands. But what makes one country’s scene strong is the relationship between the bands. The bands here are bitching and fighting for who’s best or whatever. If the bands were helping each other the whole thing would be better. Another thing is the professional work. Many bands start working and after a demo cd or an album they think that they succeeded .But there is the point that they should work more and try to do more things. Another album, a tour out of country maybe. I could name at least 10 bands that could make it but only with hard work and the right choices.

I’m sure that many new guitar players have listened to your album and admired it. What is your advice, since you are still very young in age? How can someone achieve something special apart from hard work?

Well besides hard work I believe that very important is to believe in your music. To believe that you can make it because if you don’t nobody else will… Always be positive and give the 101% of your power to achieve something good. 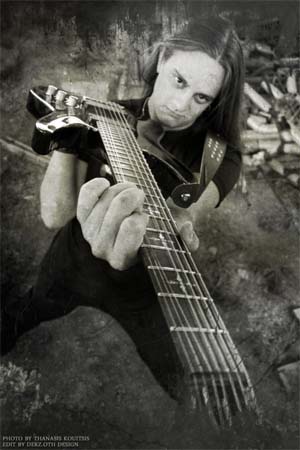 Are there any new albums that you listened to and you liked them a lot? Also we’d like you to tell us some albums from the ’00s decade that you can’t do without them.

I liked “Evangelion” from Behemoth, I think it is a great album. Also I liked the debut of a band called Section A. The album is called “Sacrifice”. Megadeth’s “Endgame” was great. Excellent guitar work from Chris Broderick. Heathen’s “The Evolution of Chaos” was superb. Rotting Christ “Aealo”, Innerwish’s “No turning back”. That’s what comes to mind at the moment probably there are more. About the 00’s… I couldn’t leave without Dream Theater albums. I think “Train Of Thought” is the album of the decade and I love all the other albums as well. I also liked every Symphony X album and I have to say Nevermore’s “Dead Heart in a dead world”, “Enemies Of Reality” and “This Godless Endeavor” are among my favorites of this decade.

Finally, the final part is yours. You can add anything we didn’t ask you and send a message or whatever else to all readers around the world.

I would like to thank you for showcasing my work and the Metalpaths readers for reading this interview. Last but not least everyone who supports my work. I’ll see you all soon. Take care and Metal on.