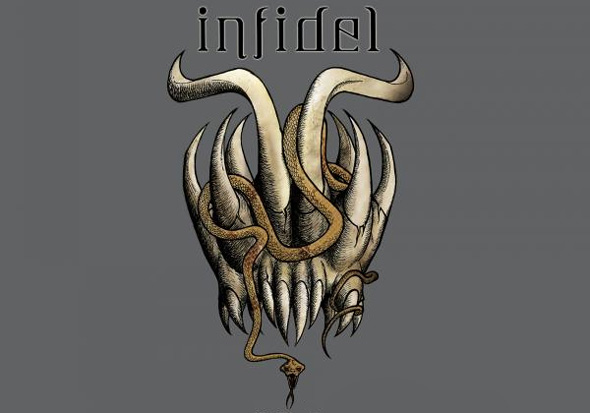 “King of Cynical Control” is the second album of the very promising Infidel from Greece.  The singer of the band Yiannis Poussios and bassist Chris Kissadjekian talk about the new album, the influences of the band and their upcoming plans.

Congratulations for your new work! This is your second album, what were your fields of interest this time?

Yannis: We had already started composing material for “King of Cynical Control” by the time our first album, “I, Oathbreaker” was released, in 2006. And by “composing” I mean through rehearsals, since we are a band that works almost completely rehearsing at the studio -we create, evolve and complete our songs. As time went by, we realized that the songs for the second album were more melodic, more technical/variform, but at the same time more heavy too (not just musically talking). In addition to that, every one of them had this “negative mood”, something between melancholy, anger, cynicism and the feeling of “quiting”, of “giving up”. And thus, when we realized that it wasn’t possible for us to write a song lasting less than 6 minutes, we decided to put only 6 songs on the album, so that the listener won’t get “tired”. 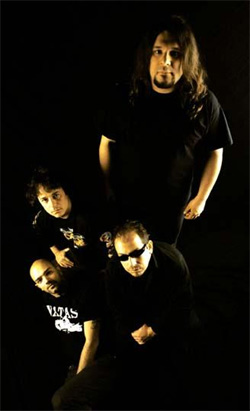 Chris: Seven actually, but we would like to believe that the seventh song will be an unexpected surprise for all our listeners, since its a cover… or, for us, a “Cover”, in capitals!

“King of Cynical Control”. How did you come up with the title and what do you mean by it?

Yiannis: The “King of Cynical Control” isn’t a particular person, nor a particular type of person. I thought of this title to express in my own way a certain attitude, a way of life, in which we cynically deal with our basic values, our needs and our dreams, in order to have the feeling that we can control things we are concerned about. In other words, we underestimate our own life in order to feel that we control it. I believe we all go through this kind of situation, more or less. We prefer to be kings in our own small, “secure” universe, filling it up with our own opinion, judgement and emotions, rather than open up and seem vulnerable to others. But, real life starts when you get down from your “throne” and face reality.

What are your lyrics about?

Yiannis: The lyrics have to do with the causes and consequences of the behavior I mentioned before. As much as lyrics are concerned, all songs in whole express this “King of Cynical Control”, but each song stands for its own too. There’s a connection between the songs, but it’s not a concept album. I believe that whoever reads the lyrics can easily get the meaning – but I think that very few really care about the lyrics they listen to nowadays.

Musically speaking, what are the differences between your two albums?

Chris: Apart from what we, as the composers, believe, everyone who listened to our new album said that “except for the personal style the band has managed to create and preserve, the feeling is much more evolved than in ‘I, Oathbreaker’. ” That makes sense and we expected such words! Every active composer evolves.
So, when our first work showed the kaleidoscope of our music tastes, the sequel wants us (or we want to believe so) more free, more spontaneous, reaching the limits of the so-called “progressive” area of heavy sound, with complicated compositions, full of variety, and totally far from the 3-minute-radio songs.

You have given quite a few live shows these days. How does the audience react to the new songs and what are the comments you ‘ve had so far?

Chris: Apart from what we ‘ve said before, it is obvious that the audience is a bit “awkward” we would say, but not suspicious as it would seem with a first look. So I gotta admit that it took me some time to get used for example to not having at least 10 heads banging, as it is a common sight in heavy metal live shows. However, by the time I realized that our music doesn’t necessarily make people dance intensively and head-bang, but (after fans have told us after live shows) get their total attention and dedication, which, at last, honors us…

Tell us a few words about the production.

Yiannis: The production was made at Fragile Studio with Vaggelis Gialamas, where our first album was recorded too. We recorded without using metronomes, using complete natural drums, because we wanted to keep the feeling one has when listens to us live. Generally I am satisfied with the result, the album sounds as “big” as it has to. The recordings were completed the summer of 2009, and by the end of the year we had finished mixing and mastering. And if you wonder why it took so long for “King of Cynical Control” to be released, the main reason is our finished contract with EMI, that released our first album, and the search of a new record company, until we ended up with Venerate Industries. 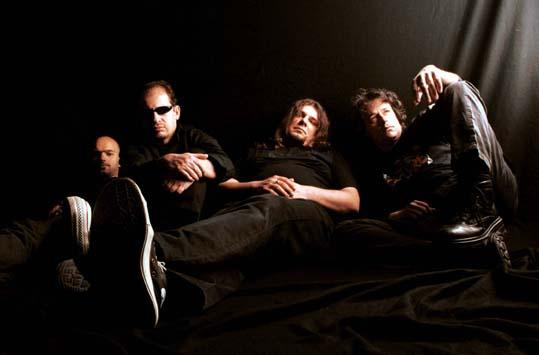 When was the band formed?

Yiannis: The creation of this band was an idea that me and Manos, our drummer, had, when we were blahblah, probably drunk. The first person that we thought of was Chris at bass guitar, since we were already friends for quite a few years. The first rehearsal we ever did was on September 2000, and for 2-3 years we tried played with many guitarists, until we ended up with Dennis, member of Acid Death and old classmate of Manos from junior high. Since that time the band hasn’t changed members, and both our two albums are with them.

Which are your influences?

Chris: From the start what made us unique was our diversity. Our general listening is between great bands such as Black Sabbath, Led Zeppelin, Thin Lizzy, Blue Oyster Cult and bands from today as Porcupine Tree or Tool. But except that everyone has different ones. Yiannis also loves Morbid Angel, Cannibal Corpse and Neurosis, Manos Lynyrd Skynyrd, Dredg and Yob, Dennis Firehouse, Opeth and Coroner and me Stevie Ray Vaughan, AC/DC and Beatles! So you realize our listening is very vague. Put it all together and you have what we represent as a whole!

Do you believe this music style has an influence? Which other bands from Greece you believe make a stand out?

Yiannis: What do you mean with “musical style”, doom metal? Cause, as we are concerned, our music could easily confuse someone who puts the usual labels we all know. What we play as Infidel is less doom than most fan of that kind prefer, and to slow and “negative” in feeling for those who seek more headbanging metal. Plus the fact that we play more complex and extended (in time), it’s hard for me to believe tha we’re going to make an impact to greek fans. That doesn’t really bother me cause I’m more interested to make something artistically concrete. Now as for other greek bands, today there are a lot with excellent performance which more people should open their eyes and ears and discover them. Damn there are here next to them! Personally speaking I have a preference for Universe 217, Agnes Vein and Dreamlongdead who are also friend, haha!!

Chris: True! And as an old-rocker besides Aphrodite’s Child, Socrates, Heraclis Triadafillidis and Lernea Ydra, Apocalypsis and Blues Whire I would like to add Nightstalker, Electric Litany, Planet Of Zeus.

Any plans for out of Greece touring?

Chris: Although it’s a teenager’s dream, our age, our social status have bound us strongly with jobs and responsibilities here in this place. Of course we still hope…we’ll see.

What have been the best moment of the band till now?

Yiannis: There are a lot of good moments which will be forever in my mind, from a rehearsal which we manage to complete a song that we appreciated, the process of recording and completing an album (which is a very special experience) to a good live performance. For me in general, being member of a band is by itself something that makes my life better because it gives me the opportunity to act and express myself. It’s hard for me to pick a moment, although after every show, even if we haven’t play as good as we want and usually do, I feel very nice – like I’ve been “cleaned”..

Chris: I couldn’t agree more with Yiannis! Very hard to choose… With much pressure I could say our first secret gig in May 2004 when our friends didn’t even expect to see us! I remember their faces when we left them alone and we got upon the stage…Priceless! One of the best nights of my life!

A message for your fans?

Yiannis: For those who want to hear entirely “King of Cynical Control” and reading the lyrics at the same time, they can visit our page in Bandcamp: infidelgr.bandcamp.com. For comments, contact and anything else send us at infidel_band@yahoo.gr. Thanks from the heart those who hear our music and come to our shows and to Metalpaths for their hospitality. Cheers!

Chris: I’ve also already given my personal e-mail adresse (kissadjekian@yahoo.com) for any on who would like to purchase our two records, as we all know it’s always better to buy directly from the band to support!