In The Studio With Paradise Lost 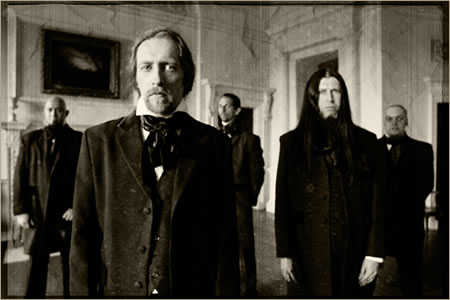 Swedish newspaper Nerikes Allehanda has posted a five-minute video report from the Fascination Street Studios in Örebro, Sweden where U.K. gothic metal icons PARADISE LOST are recording their new album with producer Jens Bogren. Due in late 2009 via Century Media Records, the highly anticipated follow-up to 2007’s “In Requiem” will feature around 10 tracks, including “First Light”, “As Horizons End”, “Faith Divides Us, Death Unites Us”, “Frailty” and “My Last Regret”.

Commented vocalist Nick Holmes: “We are very happy with [producer] Rhys Fulber’s work on the last album [‘In Requiem’], but after working on three albums together, we decided it was time to go for a different approach. After hearing the work he did with our ‘Anatomy Of Melancholy’ live DVD, we decided that Jens Bogren was the man for the job.”

He continued, “There is no full-time replacement for [drummer] Jeff [Singer] as yet, but as far as the album is concerned, the drum stool will be occupied by another Swede — Peter Damin. Sweden hails some of the best metal musicians in the world and Peter is no exception. We really look forward to working with him and his input on the album.

“Our approach this time has leaned even more towards the heavier side of things, even more so than the last. It is vital not to lose touch with our musical trip over the last 20 years. Our music may have had different facelifts, but it has always been ‘dark’ and the new album will be no exception. Musically and lyrically.

“Writing a new album is always exciting; we never get bored of writing music, and for me, it is the best part of being in a band. Each album is like a challenge to better ourselves, or at the very least, do something that’s different to everyone else. We strive to make the ultimate modern gothic metal album, and for me that has nothing to do with the common trend of ‘romance’ and ‘roses.’ It should be music to be murdered by.”