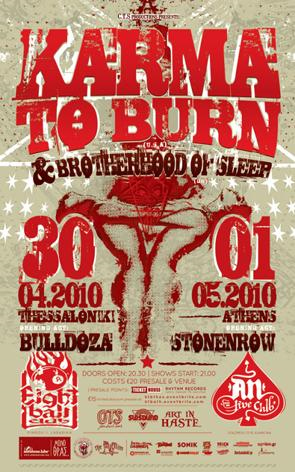 First of all I have to start this, stating my opinion about stoner (or call it what you will anyway) music in general: It is mathematically correct and certain, that in any single occasion, every individual group playing that style of music, has a certain vibe flowing and floating inside and around it. To play this music your musical roots and your way of life have to admire certain aspects of life and feel kinda circled by the vibe that the desert could have on a loner. For the massive riffs of most bands bow down to the gods called Kyuss, and we all know that Kyuss could make the whole sand amount on earth levitate just by a simple riff.

Also, this music genre has the capability or just luck to sound really enormous on live situations. It has been proved through the years and the same happened once again in Eightball Club, where we had the lack and honor to see the legendary trio of Karma To Burn in an unforgettable gig that will remain in our hearts for life. But before this, we had the fortune to see two Greek bands giving the best they could, so the gap was filled excellently and without any tireness, on most people at least. Unfortunately time was not on the side of both bands, as the gig started an hour later and we enjoyed them on a little rush.

Bull Doza is the classic stoner group that you’re going to see, and even without knowing what’s about them, you’re gonna stick to the groove of their music, their excellent rhythm section, the massive riffs and of course their trademark vocalist Bebis (Baby Boy in Greek) whose presence has that something that attracts your attention. They know how to play this style well and what makes it even better is that they feel it to the core. Only twenty minutes unfortunately as we said before, but that was enough for a warm up that made us move as much as it was required for the continuation.

Next to perform were Brotherhood Of Sleep from Athens. Also a trio like the headliners, and also instrumental 100%, but in a much more different direction compared to the other two bands. Their music has the incidents of what is known today as heavy post rocking music, but I guess their musical influences betray that they are much more than this. If someone is into this type of music, he could find incidents of Neurosis, Isis, Red Sparowes or even Tool and other experimental bands in their music. Without any words, they played forty minutes this demanding type of atmospheric music and they gained the respect of the crowd, just like Bull Doza did before.

Karma To Burn is a band that thankfully returned to provide to all of us what they know to do better: Cheer things up. Americans have a way sometimes to touch things and become gold. So did they during their first years, when they released three albums. It took them about seven years of abscence until they decided to come back. It seems that all problems were solved and they came back with a vengeance, to complete what they had left back in the day. Being instrumental while playing stoner music might seem absurd. It is not more absurd though from the fact that it caused massive stagedives and schizophrenic reactions to the crowd, familiar with thrash metal gigs.

Especially bassist Rich Mullins couldn’t keep his surprise and joy while seeing all these happening in front of his eyes. Guitarist Will Mecum was building massive walls of sound with his riffs and godly drummer Rob Oswald smashed everything in front of him. These guys are the joy of each redneck at heart. Their new album ”Appalachian Incantation” is out these days, from which we heard a couple songs, and it is surely going to win the new bet the band has to offer. I’d personally like to wish them good luck and always remain themselves. It is so rejuvenating for the fans when bands like Karma To Burn make the world seem heavier. Long live the American South!