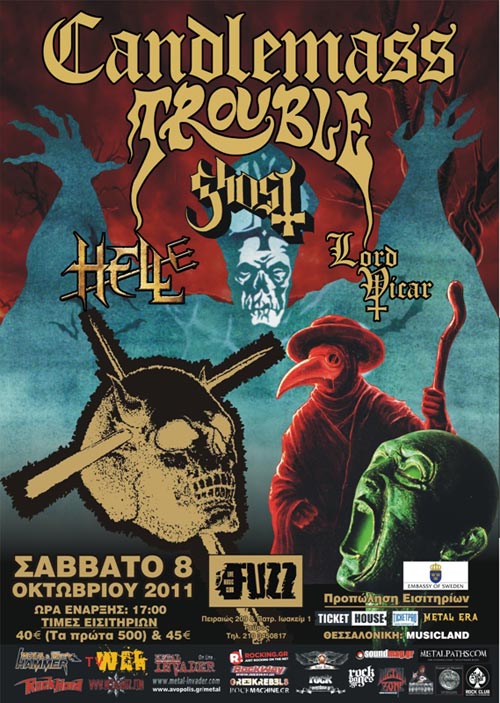 The weather forecast said it. Black clouds and heavy rain were expected on Saturday. The rain might not have come, but the clouds gathered to match the Doom day. At first Candlemass were announced as headliners, followed by Trouble, Hell and Lord Vicar. Then Ghost joined the billing. And to top it all, Johan Langqvist would appear to perform “Epicus Doomicus Metallicus” in its entirety. Needless to say that all the doom fans out there had put their flags out!

This mini-festival was supposed to start at 17:00, but of course there was the expected delay, so the first band of the day, Lord Vicar, took the stage an hour later. Unfortunately I missed them, so I can’t form a decent opinion about them, and the things I heard were quite mixed. Many appreciated their heavy doom sound, and many found it a bit boring. Whichever the case, though, they do deserve a check.

And it was time for Hell. I was really excited to see this band live. You don’t often come across bands that put out their debut album after 29 years of existence. And we are talking about an amazing debut album. Even though their sound is far from doom (it’s more like NWOBHM with a lot of Mercyful Fate) they surely kept the crowd warm. Their set was naturally based on “Human Remains”, starting with “Let Battle Commence”. Their sound could have been better, as they had some problems with the guitars, but Hell did their best. Cool riffs, weird personae, especially Kev Bower on guitar and Tony Speakman on bass, and of course great vocals. David Bower is a truly charismatic singer. The audience became more lively when “On Earth As It Is In Hell” came up, and there were a few headbangers here and there. We continued with “The Oppressors”, “The Quest”, and “Blasphemy And The Master”, during which Bower came out with a cat o’ nine tails and flogged himself. After one hour on stage, Hell completed their set and I’m sure that their show didn’t go unnoticed, even though some would claim that their stage antics were too much.

Next in line were Ghost. That’s another band that doesn’t play doom metal, but made it to the billing maybe because of their image, their lyrics and the fuzz that’s been going around their name. But they were undoubtedly interesting and their opening was perfect. When the lights went out, we started listening to “Backwards Priests”, which is best known from the masked ball scene in Eyes Wide Shut, five black robed men took their places and last came out Papa Emeritus holding a censer. I can say that this was one of the most fitting openings I’ve ever seen. Their set was based on “Opus Eponymous”, another debut album. “Con Clavi Con Dio”, “Death Knell”, “Satan Prayer” and “Genesis” were some of the songs we heard. There was also a cover of “Here Comes The Sun” of the Beatles. The sound was the best and the show was very impressive. Ghost kept their stance throughout the set and didn’t communicate at all with the fans, apart from a “Thank you Athen” in the end. The last song was “Ritual”, the hit-song of the album, and the fans reacted with a sing-along. All in all, they surely are something different, but I still don’t think that their music is worth all this fuzz.

And we were back to doom. Trouble followed. A classic doom metal group. I had high expectations. Having in mind Trouble with Eric Wagner on the vocals didn’t help when I heard Kory Clark. The man has an amazing voice, but he should be in a glam rock band maybe. Doom metal doesn’t really suit him. Generally, though, the band was in a good mood and it showed, but it didn’t quite reach the audience, that stood without participating. The sound was very good, and the songs were representing their whole discography, some of them being “Wickedness Of Man”, “At The End Of My Daze”, “Assassin”. They also played a song from their upcoming release. But the highlights of the show were “Come Touch The Sky” and “The Tempter”. Another thing I should mention is that on bass was K.K. of our own Need. After only 40 minutes Trouble left the stage, and I can say that this show didn’t meet my expectations, and I think that many share my opinion.

Last chapter of the live, Candlemass. At approximately 23:00 “Marche Funebre” started playing and we all knew that the waiting was finally over. One by one appeared on stage Lars Johansson, Mats Bjorkman, Jan Lindh and Leif Edling. Last entrance, Robert Lowe. The crowd was now wide awake to prove why the Greek fans are known for, as Candlemass opened their set with “Mirror Mirror” and “If I Ever Die”. The sound remained great, and that’s something that doesn’t happen often during lives. “At The Gallows End” and “Samarithan” followed, and it became clear that Lowe had a bit of a problem remembering the lyrics and he had to look at his cheat note on the floor. But this detail faded as Lowe invited Johan Langqvist on stage. Three magic words follow. “Epicus Doomicus Metallicus”. I don’t think that words can describe what happened when Candlemass played the first notes of “Solitude”. The venue was on fire, and everybody was singing along. And the same with “Demon’s Gate”. Then Langqvist said “I think you know the next one, it is a good song”, and the crowd started singing “Crystal Ball” even before the band did! “Black Stone Wielder”, “Under The Oak”, “A Sorcerer’s Pledge”, they all had the same impact on the fans, who were headbanging as crazy and singing their hearts out. Langqvist’s performance was top notch and Edling was in such a good mood, smiling all the time and singing his songs with the audience. After almost an hour, Lowe came back up for two more songs, “Well Of Souls” and “Emperor Of The Void”. The comparison was unavoidable, and it seemed that Langqvist won the fans over easily. But that didn’t prevent anyone from enjoying the songs to the fullest. And the live was reaching its end. One more song. Lowe asked the fans which one they wanted to hear, and he granted them with “Darkness In Paradise” as a duet with Langqvist. What a great way to end the show!

After almost 8 hours, everybody started leaving the venue with a huge smile on their faces. There were ups and downs, there always are. Some liked the bands, some didn’t. Some knew what to expect, some didn’t. But in the end, most of the people came for Candlemass, Langqvist and “Epicus…”. It was a dream come true for most doom metal fans. Listening to this historic album in its entirety and with its original singer really payed up. I don’t think that we’ll get another chance to see something like that live, in the near future that is. Those who were there will remember it for a long, long time. Those who weren’t, well, their loss…