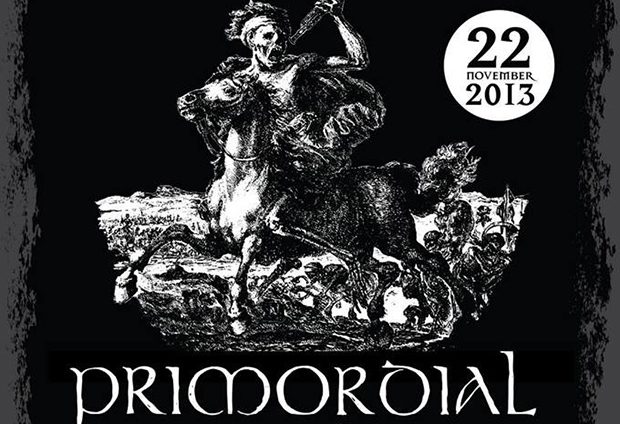 Full scale Irish doom assault in our country this Friday, with Primordial returning almost exactly one year after their last performance here, this time bringing fellow Irish doom/folk metallers Mael Mordha as a support as well and it is certain we are in for a treat!

First upon the stage was Greek power/thrashers (although in concert conditions this term doesn’t appropriately describe their sound) Desert near the end. I mostly enjoyed their performance. They had a solid, crushing sound (bringing something of doom metal in the atmosphere) to begin with and a quite promising singer behind the microphone, producing all in all a satisfying result for an opening band. One particular song they played, called “The night” was what really caught my attention in their performance.

After that successful opening though, the next edition in the concert’s line up was somewhat odd. Bandemonic’s style of traditional powered-by-Dickinson power metal, with cliché song titles such as “Chains”, “The seeker” etc matching their (mostly) cliché song structures left me totally unimpressed. Great work on the vocals though, that guy is a talent, but that was definitely NOT the concert for Bandemonic to be in. Maybe in a power metal concert they’d have made much more sense but in that case I was counting the minutes for Mael Mordha’s appearance.

And when that time came, oh what an appearance that was. Blue war paint on the face and body, a horn in the hand to sound the commence of the battle there was about to follow and a little flute in the pocket were the key points, making Mael Mordha look like the cast from Braveheart had decided to play as a tune or two. And as a result that was not far from reality. Their Gaelic metal style was as pure as it gets, as if Ireland itself had transformed in a band and played for our satisfaction! The towering figure of Roibeard O’ Bogail (seriously now, if that is not the name of a Celtic warrior, I don’t know what is) was dominant above stage with all the crowd staring at him in awe as his magnificent voice was warming our ears and hearts and when he played the flute we traveled for brief moments in the cliffs and shorelines of Ireland. The rest of the band performed perfectly, with clear sound and not even the slightest mistakes in their songs. And what songs they played! “Pauper of souls”, Winds of a thousand winters”, “Bloody Alice” and of course they didn’t forget to play some tunes from their new killer album “Damned when dead”, such as “Dawning of the grey” and (perhaps one of the top 5 songs of 2013) “All of Eire will quake”. Brilliant, war like performance by Mael Mordha, I can’t wait to see them again in our country!

Then came the time we’ve all been waiting for. Primordial faced a major difficulty earlier on, with the airline losing all their equipment. But hey, this is Primordial we’re talking about; of course they wouldn’t back down! They found other instruments and performed with all their passion. I will never forget the entrance. And I mean never. All lights out, just the logo of the band in a huge banner in the back and “Dark horse in the wind” echoing in the distance…. And then, that awe inspiring beast, Alan Averill gets on the stage and screams to the crowd with such ferocity that it echoed all the way to the back of the venue. You don’t do that, unless you feel like you own the place. And this is what sums up Primordial appearance in Greece. They played like they owned the place. Confident, devastating, emotional, perhaps the best metal band of our times gave it all on stage for 120 minutes, nonstop.

The setlist was EXCEPTIONAL! “Sons of the Morrigan”, “Song of the tomb” and “Autumn’s ablaze”, three of my greatest concert surprises left me just watching, motionless and powerless to move from the majesty of that sound. My mind was flying somewhere else and my soul was mourning. Alan’s performance will forever stay etched in my memory. A scary frontman, infusing us unbelievable power mixed with grief, epicness and a notion of undeniable respect, pacing up and down on the scene giving fiery looks to the crowd (if you met his gaze it was possible to immediately turn to stone I tell you!) and trying to make us rise up, he delivered the song with such passion, such emotion and ferocity I’ve rarely witnessed in any other concert. Other songs from their setlist was “Let the sun set on life forever”, “Traitor’s gate”, “Bloodied yet unbowed”, “Lain with the wolf”, “Gods to the godless”, “Burning season” and of course their classic hymns, played in every concert, “Heathen tribes”, “Coffin ships” and “Empire falls”. It was a truly legendary performance by Primordial and I feel blessed to have witnessed it.

P.S It was a shame that the concert ended so late, almost at two o’ clock (with Primordial showing up at 12 o’clock, for god’s sake…) and many people were forced to pay for cab fees in order to return home. I trust there will be better planning next time.