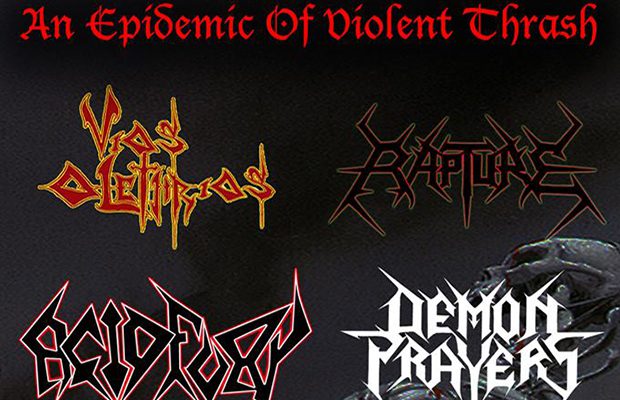 Saturday night leads us to 7Sins club for a gig of up and coming Thrash metal bands, showing how powerful this music genre has become over the current decade. First to play were Secret Angels, who were just bad. The guitar was out of tune, the vocalist didn’t seem to have found his style, and the covers of “Deathhammer” (Asphyx), “Insane” (Obituary) and “Anubis” (Septicflesh) didn’t help much, even though the first two were decent.

Coming up next we have Skull Koraptor with their Bay Area Thrash style who rose the interest as well as the frequency of mosh pits and stage dives, contributing to the party atmosphere every self-respecting Thrash gig owes to have. On top of that “Fight Fire With Fire” (Metallica) to rip this place apart. Good job guys!!

The massacre continues with Death/Thrashers Acid Fury on a Kreator/Sepultura mixture that managed alongside their covers “Pleasure To Kill” (Kreator), “Pull The Plug” (Death), “Postmortem” (Slayer), “Troops Of Doom” (Sepultura) to bring 7Sins upside down, one should just look at the number of stagedivers!

Coming up next we have Demon Prayers from Lamia. Honoring mostly their new great album “Evoke The Pain” on their set, they gave us a killer combination of German Thrash (Sodom/Kreator) with vocals mixing Phil Rind (Sacred Reich) and Max Cavalera (Sepultura). Including a kick ass cover of “Remember The Fallen” (Sodom). The band was simply killer and I can see them going straight for the top if they keep up like that.

Last but not least the more promising Rapture and Vios Olethrios (Devastating Life in Greek, one hell of a name!). Rapture are preparing a new album which shows some departure from the Megadeth/Exodus style of the “Gun Metal” EP to something extreme reminding me of Kreator and Sadus of the “Swallowed In Black” era. The opening with “Angel Of Death” (Slayer, as if you didn’t know right?) and closing with a kick ass cover of “Ausgebombt” (Sodom) which brought all the audience  on stage ended a great performance

Vios Olethros closed the event with a sound close to Pantera (ended with a cover of “Fucking Hostile”), Sepultura and The Haunted including material from “Conspiracy Of Slime” EP devastating the place. I don’t think that we can talk more about the audience, stagedivers and moshers did it their way and destroyed the place to the ground!! An amazing night overall! Support the bands everywhere they play and don’t forget: THRASH!