Church of Misery
Thy Kingdom Scum 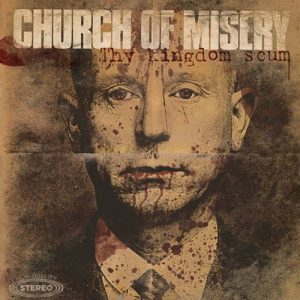 Can Japan be a doom country? Surely! Church of Misery is a fair example of some good, old-school, eastern doom metal. The Japanese doomers from Tokyo have made a big name in the European and American music world with their love for serial killers and doom music. Combining those elements we have the band, a heavy, stoned mood and some awesome records for doom lovers. Since 2009 when ‘Houses of Unholy’ has been released (their best record in my opinion), the band have been busy writing new material and touring the world. In May, 2013, ‘Thy Kingdom Scum’, their fifth full length record have been released, haunting us with some good old serial killer’s stories.

‘Thy Kingdom Scum’ follows the same recipe as far as the concept of the record is considered. We have new stories about famous serial killers and massive murderers. It is always fun to search about those stories while you are listening in Church of Misery. It really helps circling the right mood for the specific band. Now about the music of the record, Church of Misery is following the heaviest doom path they could ever create. The melodies are ‘harsh’, the guitars and drumming are heavy, while the production of the record and the whole sound, in fact, sounds dark and psychotic. Though the record, the power of the riff flows unstoppable, creating the illusion of hearing a sludge-doom jam section.

‘B.T.K’ , the song about Dennis Rader and the record’s first track is the official single off ‘Thy Kingdom Scum’. It is an instrumental one and contains some of the most heavy and kick-ass stoner riffs ever created. However, I needed something more for the record’s single. As ‘Thy Kingdom Scum’ progresses, the mind of the listener swirls into the groovy doom melodies, which touch the early Black Sabbath spirit, but with more experimental and dizzy mood.

Songs like ‘Brother Bishop’ reminds us of Black Sabbath in a special way, throwing unique riffs in the ears of the listener. The stoner element, with the stoned guitars, full of delay and echoes, becomes easily noticeable in songs like ‘Cranley Gardens’. The record also features ‘One Blind Mice’, a cover song, originally created by Quatermass! Last but not least, guitar solos like in ‘Dusseldorf Monster’ are considered some of the best moments of the record.

However, ‘Thy Kingdom Scum’ is not the best that Church of Misery can achieve. The record becomes recurrent in some parts, regardless of the whole jam feeling. Moreover, the tremble in Hideki’s voice is effusive sometimes, for example in ‘Cranley Gardens’. Beside that, I can’t find any other disadvantage of the record during the time, but I feel that ‘Houses of The Unholy’ was slightly better, as far as the dynamic of the record is considered.

In whole, ‘Thy Kingdom Scum’ is a special record. It is enjoyable from the beginning till the end. The golden decade of the seventies doom in a disc! Church of Misery justified one of the most influential doom bands of our time.