Twilight Of The Gods
Fire On The Mountain 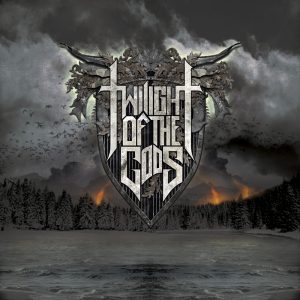 Let’s kick start this review just by mentioning the musicians involved in this epic metal super band. On the bass we have Frode Glesnes, member of the black/Viking metal band Einherjer. On the guitars we have Patrik Lindgren of black/Viking metallers Thryrfing and Rune Eriksen of savage black/thrashers Aura Noir. On the drums you have Nick Barker, session or regular number for literally dozens extreme metal bands (black, thrash, death metal, you name it) and behind the microphone you have none other than Alan Averill of Irish blackened doom metallers Primordial.

The result you would expect from such a line up (and with such a name, leading us directly to Bathory’s “Twilight of the gods” masterpiece album, although in Nordic mythology the twilight of the gods is a very common reference, as it signifies the end of the world) would be something equivalent in sound such as Bathory’s epic/black metal albums such as “Hammerheart” or “Blood Fire Death”, right? Totally wrong! This album could be described in sound as Manowar’s “Kings of metal” Volume 2! That’s right folks, Twilight Of The Gods leave their black metal legacy aside for the moment and in this project devote themselves in a tribute to the classic epic metal sound originating from the United States (Manowar, Manilla Road, Omen, Warlord etc).

I know, at first you might think of this choice as disappointing, since it seems rather odd that an all star group of five musicians influenced by black and Viking metal would produce a more cult and cheesy epic metal sound. But the result is not bad at all! The fun I had listening to this album exceeded all my expectations. There are some really powerful riffs in there, mixed with skillful bass playing and strong solid drumming, producing that huge epic sound we love, that strikes you like a brick wall and expects nothing less from you than to bang your head till your neck breaks. To be fair, there are some moments in this album that bring that foul smell of crushing doom metal that we all adore and the songs that do have that sound are the best from this release (“Children Of Cain“, “The End Of History“).

What really elevates this album though is Nemtheanga’s vocal performance. I’ve said it before, this man is a wizard of the voice, just a little twist in the verse and he can send your brains flying in the air. That’s what he does here too. In a project quite different from what he normally does, he brings his own, unique style in “Fire on the Mountain”, yet alters it as much as needed to fit the specific genre, giving to the listener a perfect result for one more time in his career. Refrains, bridges, soft whispers you name it, for one more time his splits mountains and seas with his voice.

All in all, these guys bring back all the clichés we love in epic metal (many are the times when you will hear the words hammer, sword, metal, brothers, ride, “call to arms” and of course STEEL!) and do it in such a way that sounds natural and as if a day hasn’t passed since Manowar released albums that if you didn’t have them in your collection, the best thing you could do was to stop listening to metal. The influences for Twilight Of The Gods are apparent in this album and you know what? I really like that. It’s nice to see some musicians to engage in a music style you wouldn’t expect them to. Maybe on their next releases they’ll try a more Nordic approach in their style, but until then TRUE CULT EPIC METAL UNITES US BROTHERS!

P.S: The intro from “Preacher man” is a blatant reference to “Metal daze”. I like this album so much!