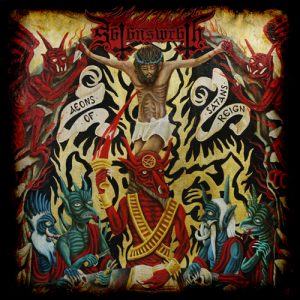 Many bands have tried to use Satanic imagery and lyrics in their music as part of their whole individual concept. From Mercyful Fate and Venom to early Slayer, Sodom, Celtic Frost etc. Most of them have been convincing making the difference in the metal scene as the aforementioned ones for example. Satan’s Wrath is one of those bands that are making it happen with love and passion for what they do. Their previous effort “Galloping Blasphemy” was well received. Their style is somewhere between Venom, Sodom and Mercyful Fates’ classic metal feel and the vocals reminiscent of early Bathory.

Things go on in that style with “Only Satan Is Lord” to start their new offering “Aeons Of Satan’s Reign” in a black/thrashing way reminiscent of Venom/Sodom and “Die White Witch Die” bringing the classic metal influences up front in terms of soloing as well as riffing. On both these tracks the atmosphere is dark and sinister showing that the satanic image of the band is really convincing. Coming up next “Archfiend” with its Celtic Frost-inspired riff making the listener bang his head hard, mostly a mid tempo track. Which is brought to balance by “Ecstacies Of Sorcery” ripping fast through our ears (we also have the use of some keyboards in the background on this and the previous one) making us imagine stage diving bodies in live shows, with a midtempo Thrashing riff fading out. One of my personal favorites off the record.

The next track “Satan’s Blood, Lucifer’s Fire” starts off in a mystical and epic way only to kick in a slow headbanging Slayeresque riff throughout the chorus and the verses. Time for some neck snapping, you maniacs. One of the best tracks on the record haunting and heavy as fuck including great guitar duel work that would make Mercyful Fate proud! Another track using some keyboards from the very beginning, in a discrete way without taking the aggression out of the song. Then we have “All Of Us Witches” with its Greek intro (I think from an old satanist story in Pallini, Greece), a track that sounds as if taken from a lost Sodom, Slayer or Bathory tape! Ripping fast with great soloing! Great stuff continues with “Lives Of The Necromancers” being less fast and more staccato and headbanging with a dark atmospheric chorus showing some strong Black metal disharmony then going into an eerie acoustic part a bit after the second chorus. So then comes the final epic of the title-track (nearly 9 minutes long) kicking off with a dark melody and Danazoglou’s vocals one clean guitar intro, then driving guitars kick in with great lead work only to turn into a thrashy tornado devastating everything in its path. Then in the middle a tapping break but only to maintain the tempo and prepare for a kick ass solo and more headbanging riffage done the evil way over that. An epic slower riff ends the song after the guitar, where the keyboards play the same riff fading out.

Great record, really solid result for such a new band, they don’t sound like “more of the same” they have their own identity and that’s definitely a pro for them. Horns up and hail!