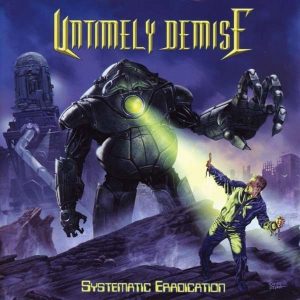 Canada is well known for spawning killer speed/thrash bands: Exciter, Razor, Sacrifice, Annihilator, Voivod and now out of nowhere these guys. Untimely Demise have signed a contract with up and coming record company Punishment 18 from Italy, the same one that has Ultra-Violence. This happened after the positive feedback of their self-released debut “City Of Steel”. Obviously the guys wanted to take it to the next level.

Their first album via Punishment 18 “Systematic Eradication” starts off with “Spiritual Embezzlement” showing some later Death influence on the music and vocals combined with Megadeth’s intricate playing. Up next we have “The Last Guildsman” which is mostly midtempo and melodic including a kick ass chorus some great soloing that would make Chuck Schuldiner proud, followed by sped up riffage of the same style made for headbanging. Things get even better with the Destruction-like intro of “Somali Pirates” built to make big circle pits in live shows. “Redemption” kick ass intro riff and lead brings us to this track, made mostly for headbanging with a faster part right after the second chorus and some great lead work. There is also a Death Angel influence in this songs’ vocals.

The upcoming track is “Navigator’s Choice” kicking in with a technical drum intro then into thrashing madness and once more different style of vocals, as if he keeps the basis (those Chuck-Schuldiner-Symbolic-era vocals combined with Jeff Walker of Carcass) and then adds flavors in the songs depending on the song. There’s also a beautiful lead break right before the finale. “A Warrior’s Blood” follows to keep up the speed level and here the vocal style is the same as the first track, until the first lead break which is simply killer. Next we have “Revolutions” which starts in a headbanging way then speeds up in the vein of “Symbolic” (yes this album has a strong influence on the band, no wonder) including a small groovy break then back into the thrashing madness. “Escape From Supermax” starts once more with a drum fill resulting to a headbanging riff, speeds up a bit then back into headbanging and finally speed up to go thrashing throughout the chorus then a ripping kick ass riff comes in making neck snap from the speed and then hairs stand up due to goosebumps with that solo before the final verse and outro lead. And this is how the album ends.

What a pleasant surprise! Got to say I did not expect it and I’m sure I can wait a lot (and I mean A LOT) from these Canadian fuckers. Cheers you maniacs!!